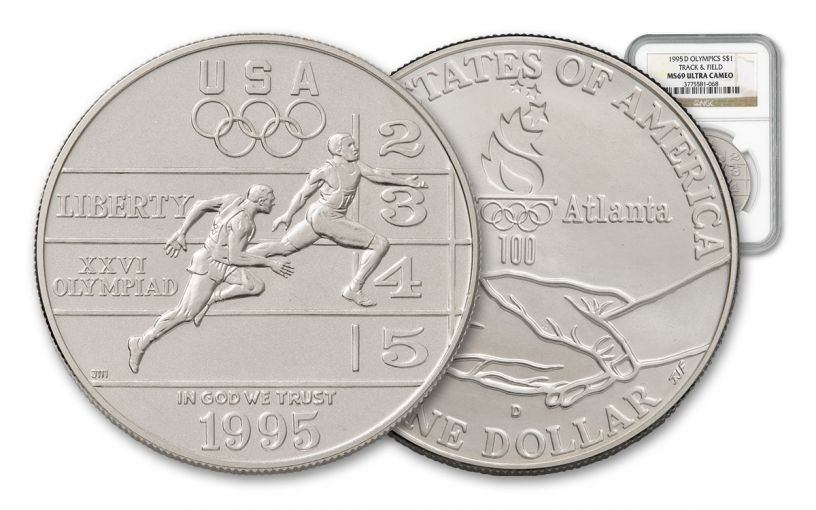 Availability: Out of Stock
This item is currently Out of Stock. Please sign up to be notified if this product becomes available.
Item #
246687
Add to Wish List Add to Wish List Wishlist is for registered customers. Please login or create an account to continue. Add to Compare
Recommended Products
Product Description

The Spirit of the "Centennial Olympics" Still Shines Today!

When Atlanta was awarded the 1996 Summer Olympic Games, the U.S. Mint embarked on an ambitious commemorative coin program to celebrate the event. This 1995 Commemorative Silver Dollar celebrates the track and field events at the "Centennial Olympics," the 100th anniversary of the modern Olympic Games which were first held in Athens in 1896.

Minted at the Denver Mint, this Track and Field Commemorative Silver Dollar was one of two versions that were produced -- the other being a proof struck at the Philadelphia Mint. This Commemorative Silver Dollar is struck in 90% silver, just like the Morgan and Peace Silver Dollars from back in the day! The obverse features a track event showing lanes 2 through 5, with the runner in lane 4 outstripping the runner in lane 5. The reverse shows a pair of clasped hands and the Atlanta Olympics logo.

Your Commemorative Silver Dollar will come graded by either Professional Coin Grading Services (PCGS) or Numismatic Guaranty Corporation (NGC) in near-perfect Mint State-69 (MS69) condition. Fewer than 25,000 were minted, making this coin one of the harder to find 1995/96 Olympic coins struck by the U.S. Mint. Don't break pace now -- add it to your collection today!