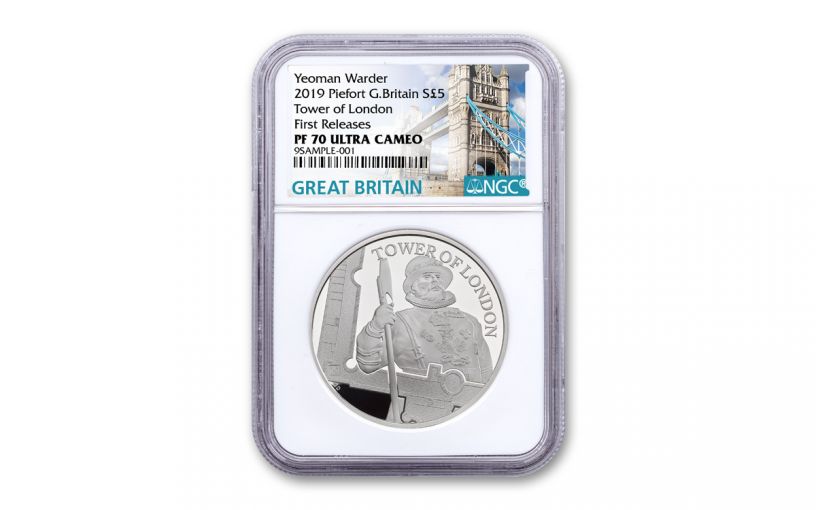 Availability: Out of Stock
This item is currently Out of Stock. Please sign up to be notified if this product becomes available.
Item #
351778
Add to Wish List Add to Wish List Wishlist is for registered customers. Please login or create an account to continue. Add to Compare
Recommended Products
Product Description

If you don’t want to travel all the way to England, you can see the Yeoman Warders up close right from the comfort of your living room with this fantastic coin. This £5 legal-tender coin is struck in nearly two ounces of 92.5% fine silver as a double-thick Piedfort Proof that’s twice the weight of a standard £5 coin. It brilliantly depicts one of the Beefeaters as he stands on guard before a portion of the Tower’s outer wall, ready to assist curious tourists and sightseers.

Your 2019 Great Britain £5 Tower of London Yeoman Warders Silver Piedfort Proof has also been graded by the Numismatic Guaranty Corporation (NGC) as being in flawless Proof-70 (PF70) condition, a distinction that means your perfectly-graded proof will have ZERO imperfections – showing all features and fields exactly as the engraver and mint intended. In addition, NGC has certified your proof to be a First Releases (FR) coin, a designation that means it was received by NGC or an NGC-approved depository within the first 30 days of its release. Collectors seek out these coins because they are produced with new dies and considered to have sharper strikes and deeper mirrors than those that are struck later.

Each coin in this four-piece series is part of a greater whole. When all four coins of the series are arranged together it completes an image of the Tower of London. It’s a fascinating aspect to these coins – but only possible if you secure this third release while it’s still available! Only 1,160 of these silver piedfort proofs will be struck, so reserve yours now!