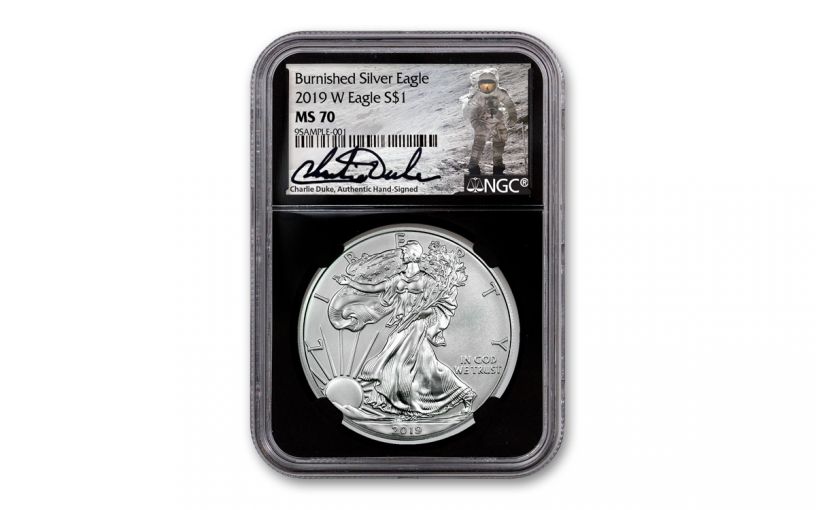 Availability: Out of Stock
This item is currently Out of Stock. Please sign up to be notified if this product becomes available.
Item #
352372
Add to Wish List Add to Wish List Wishlist is for registered customers. Please login or create an account to continue. Add to Compare
Recommended Products
Product Description

Since 1986, the United States Mint has released Brilliant Uncirculated (BU) condition bullion Silver Eagles every year. And, with the understandable exception of 2009, annual Silver Eagle Proofs have always followed close behind. However, there's one type of Silver Eagle that has a far fewer collective mintage than either one above – the Burnished Silver Eagle. Struck from specially burnished planchets, these Silver Eagles are perennial collector favorites.

Now this esteemed coin soars to new heights in 2019 with a special nod to the 50th anniversary of the Apollo 11 moon landing. That’s because each Silver Eagle available in this offer comes encapsulated with an exclusive label signed by a key member of the Apollo 11 mission!

Each 2019 One-Ounce Burnished Silver Eagle will come sonically sealed in an acrylic holder with a black display core and an exclusive label bearing the hand-signed signature of astronaut Charlie Duke, who not only served as CAPCOM (Capsule Communicator) for the Apollo 11 mission – meaning he was the voice of mission control for the astronauts – but he later became the youngest person to ever set foot on the moon during the Apollo 16 mission in 1972! It’s an incredible feature to an already highly sought-after coin that’s sure to send fans of the series to the moon and back!

In addition, these 2019 One-Ounce American Silver Eagles struck at the U.S. Mint’s branch mint at West Point have been graded by the Numismatic Guaranty Corporation (NGC) as being in flawless Mint State-70 (MS70) condition, a distinction that means these perfectly-graded coins will have ZERO imperfections – showing all features and fields exactly as the engraver and mint intended. That means you’ll be able to see the coin’s stunning combination of Adolph A. Weinman’s classic Walking Liberty on the obverse paired with John Mercanti’s Heraldic Eagle reverse design in the way they were meant to be seen!

Pay tribute to the 50th anniversary of Apollo 11 with this pristine high-grade 2019-W Burnished American Silver Eagle featuring a special signature from Astronaut Charlie Duke. Reserve one of these silver coins now!