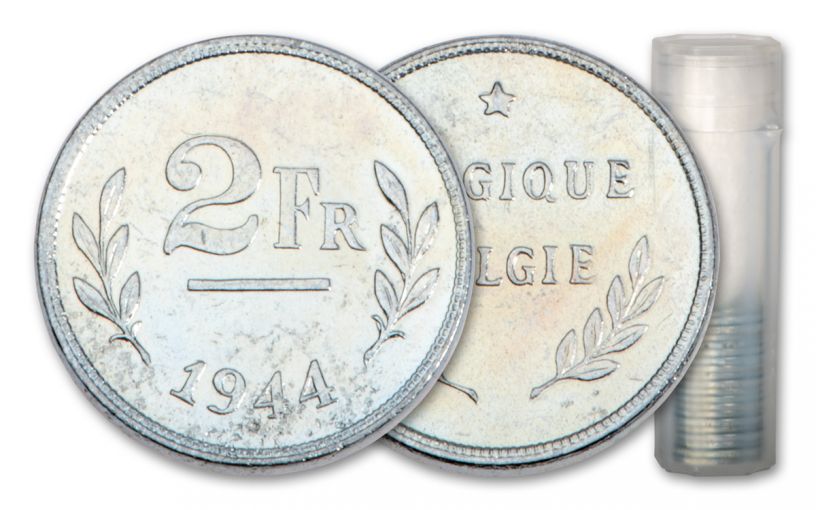 Availability: In Stock
This item will ship within 2 business days.
Item #
349301
Add to Wish List Add to Wish List Wishlist is for registered customers. Please login or create an account to continue. Add to Compare
Recommended Products
Product Description

There’s a famous pastry roll in Belgium called the Pain à la grecque – a thin rectangular treat made from milk, bread, brown sugar and cinnamon and sprinkled with granulated sugar. A popular confection in Brussels, the dessert roll is delicious. Another roll from Belgium that’s no less appetizing to coin collectors is this 20-piece roll of 1944 Belgium 2 Francs coins. What makes these coins loom large among numismatists is not only the fact that they were uniquely struck in zinc-coated steel and survived the horrors of World War II intact, but that they were actually produced by the United States Mint!

Here’s the story: Collectors around the world know all about the “Steelies,” or Steel Cents struck by the U.S. Mint during WWII. As the conflict raged on, America’s war effort needed copper, and lots of it! Answering the call, the U.S. Mint turned over its stores of copper and in 1943 struck its Lincoln Pennies in pure American steel with a zinc coating. The Mint struck these special and unconventional Steel Cents for one year and one year only.

A year later in 1944, these Belgium 2 Francs coins were struck by the Mint from a supply of the same planchets used for the 1943 Steel Cent. It was just one way we lent support to Belgium after it was notoriously occupied by Germany’s Nazi forces in 1940 and was unable to mint its own coins.

If you’re fortunate to already have in your possession a full roll of 1943 Steel Cents, then you need to secure a 20-coin roll of these Zinc-Coated Steel 2 Francs coins and complete the set! These coins are all in circulated condition and will come in a numismatic tube accompanied by a Certificate of Authenticity. Add this delectable “roll” to your collection today!