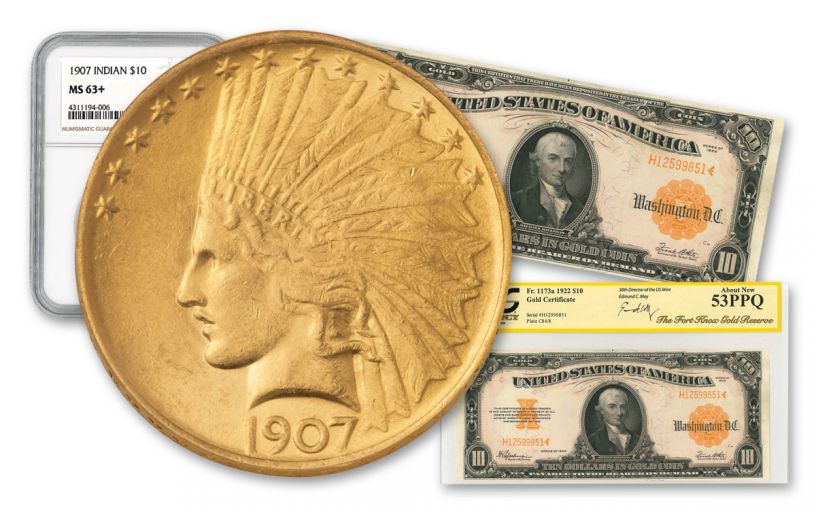 Availability: Call-In Only
This item is only available on a Call-In basis. Please call 1-800-510-6468 to speak to a representative.
Item #
351029
Add to Wish List Add to Wish List Wishlist is for registered customers. Please login or create an account to continue. Add to Compare
Recommended Products
Product Description

Shortly after 1907, a family from New York began sending large-sized “Horse Blanket” Gold Certificates overseas to Italy. So as not to raise any red flags and attract unwanted attention, the family sent just three Gold Certificates ever few weeks or so. This went on for some 20 years and the Feds never caught on! Fast forward several decades later and one of our agents – an expert in U.S. paper currency – was notified by an overseas bank about the existence of this hoard of U.S. Gold Certificates. In his own words, the hoard was the “paper currency deal of a lifetime!”

Thanks to our agent’s timely discovery, we’re making these notes available for you to add to your collection. In this offer you can secure a last-year-of-issue 1922 $10 Gold Certificate Fort Knox FR 1173 certified by the paper currency grading division of the Professional Coin Grading Service (PCGS) as being in About Uncirculated 50 to 53 Premium Paper Quality (PPQ). Grades will vary. In addition, each note will come in a special currency holder that includes a label personally signed by Edmund Moy, the 38th Director of the U.S. Mint and the man who was in charge of the nation's gold reserves at Fort Knox, where the $10 and $20 gold coins backing the notes were stored. This marks the first time EVER that PCGS has encased currency notes with a special pedigreed label!

And speaking of gold coins, we’re pairing the certificate with a first-year 1907 $10 Gold Indian – one of the gold coins that could have been exchanged for the Gold Certificate! And what a coin! Designed by American sculptor Augustus Saint-Gaudens as part of President Theodore Roosevelt’s efforts to beautify America’s coins, it’s the coveted “No Motto” variety that did not feature the inscription IN GOD WE TRVST.” What’s more, this coin will come graded by the Numismatic Guaranty Corporation (NGC) as being in Choice Uncirculated Mint State-63+ (MS63+) condition.

Up until 1933, you could exchange one of these certificates for one of these coins. But when President Franklin Delano Roosevelt took the United States off the gold standard that same year, it became illegal to own Gold Certificates and coins like the $10 Gold Indian. These beautiful pieces of American history were supposed to be turned into the Federal government, where they were ruthlessly destroyed. Fortunately, some have survived for today’s collectors, and now you can secure BOTH for your collection if you order now!