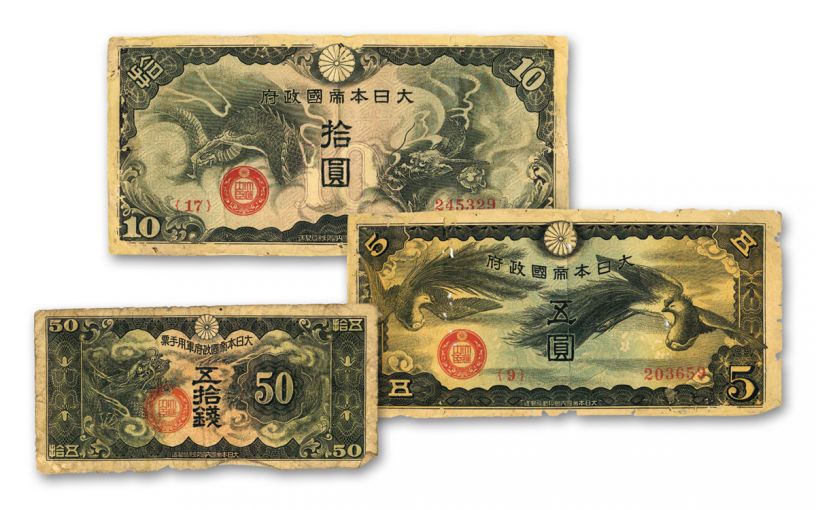 Availability: In Stock
This item will ship within 2 business days.
Item #
349314
Add to Wish List Add to Wish List Wishlist is for registered customers. Please login or create an account to continue. Add to Compare
Recommended Products
Product Description

At the onset of World War II, nations around the world were creating new forms of currency with which to pay their troops. In Japan, that currency took the form of these stunning Dragon Military Payment Certificate (MPC) notes, which feature completely original, ornate never-before-seen designs.

Dominating these notes are images of Roosters and Dragons – symbols in Japanese culture of luck and good fortune. The detail used to create these creatures is superb. Besides being used by Imperial Army troops, these notes became the official currency in some territories occupied by Japan across the South Pacific and Southeast Asia. The original designs were a key element to these notes since Japan did not want to exchange them for gold and silver like standard notes. The designs and thick red lines overprinted on the notes clearly made them stand out as Military currency.

The three notes in this set include a 5-Yen note, a 10-Yen note, and a 50 Sen note – each in circulated condition. That’s right – each of these notes was actually issued to Japanese troops during World War II! It’s an important and attractive set of World War II history, all for less than $30. Our supply of these authentic Japanese MPC Notes is limited, so hurry and secure yours before another military history buff gets them first!