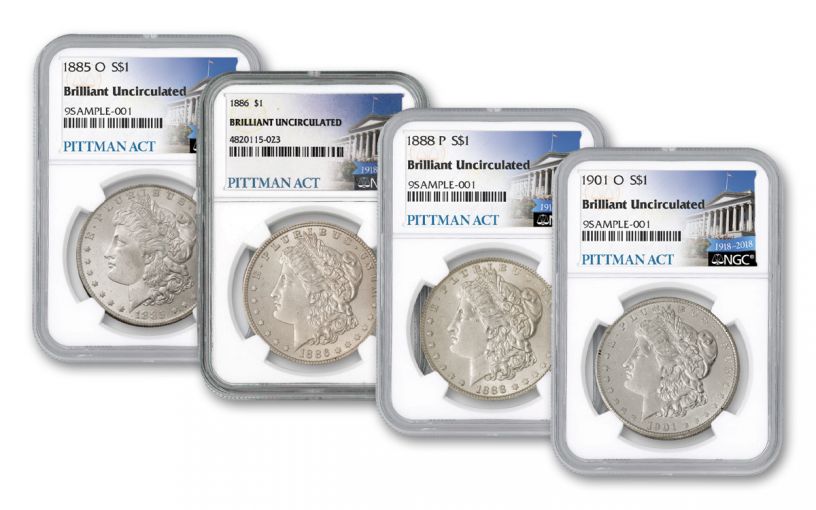 Availability: Out of Stock
This item is currently Out of Stock. Please sign up to be notified if this product becomes available.
Item #
348287
Add to Wish List Add to Wish List Wishlist is for registered customers. Please login or create an account to continue. Add to Compare
Recommended Products
Product Description

Struck more than 115 years ago, these four Morgan Silver Dollars are among the few to escape the melting pots ordered by the infamous Pittman Act, and Act of Congress which required millions of hefty Morgan Silver Dollars be collected and melted down for their precious metal. Sponsored by Nevada Senator Key Pittman, the law directed the United States government to collect massive quantities of U.S. silver dollars and “repurpose” them for sale to Great Britain, and for a planned new U.S. silver coin – the Peace Silver Dollar.

The law was passed on April 23, 1918, and at the time the Morgan Silver Dollar was still in use, having been struck from silver mined from the famous Comstock Lode in the days of the Wild West. Hundreds of millions of these coins were struck, but thanks to the Pittman Act, hundreds of millions were bought up by the U.S. government and melted down. When the cranage was over, more than 270 million silver dollars had perished in Pittman’s melting pots. This single act, plus the ravages of time and circulation, has led experts to believe that as little as 15% of all Morgans remain in existence today in any condition – just one reason why collectors are always seeking out coins like these that escaped the melting pots and survive today in gleaming Brilliant Uncirculated (BU) condition.

In this offering, you’ll receive four Morgan Silver Dollars – two each from the Philadelphia and New Orleans Mints. The coins included are 1885-O, 1886-P, 1888-P and 1901-O Morgans, all sealed in protective holders by the Numismatic Guaranty Corporation (NGC) with special Pittman Act labels. The entire set will arrive in a glass-top wooden presentation case along with storybooks on the Morgan Silver Dollar and U.S. Historic Mints. It’ an incredible set at an incredible price!

Pay tribute to silver coins that survived the Pittman Act with this four-coin set of Morgan Silver Dollars from the Philadelphia and New Orleans Mints. Once our supply disappears, it might be gone for good. Don't wait any longer to secure your set now!