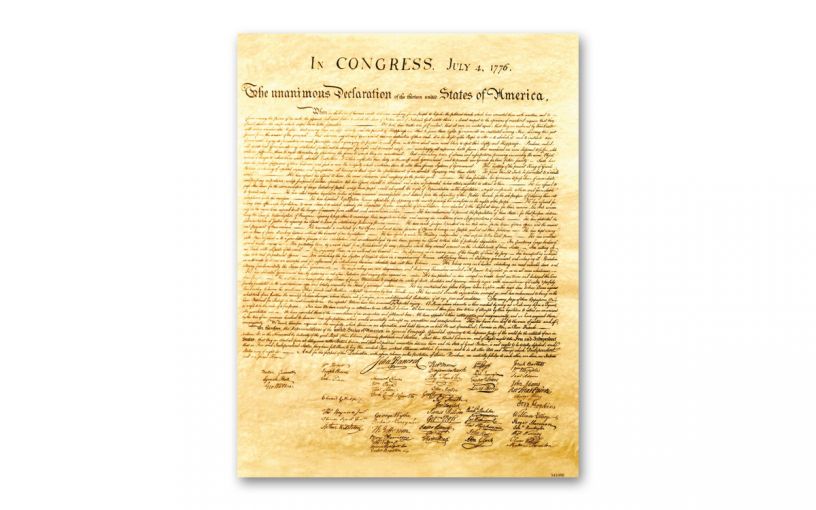 Availability: In Stock
This item will ship within 2 business days.
Item #
341098
Add to Wish List Add to Wish List Wishlist is for registered customers. Please login or create an account to continue. Add to Compare
Recommended Products
Product Description

Declare Ownership of One of the World’s Most Important Documents

By the summer of 1776, America was at war with Great Britain. The Battle of Bunker Hill and the Battles of Lexington and Concord had already been fought in the spring and summer of 1775. Not quite yet a nation, however, America and its Founding Fathers needed something, some kind of declaration, that would announce to the world that theirs was not just backwater rebellion, but a revolution that would change the world.

Enter 33-year-old Thomas Jefferson. Though lean on years, the young patriot brought to the Continental Congress in Philadelphia a reputation for literature, science and composition. He was a man who stood out among his peers for his natural ability to eloquently express his thoughts through the medium of pen and paper. Over the course of two weeks in June, Jefferson drew on documents such as the Virginia Declaration of Rights, state and local calls for independence, and his own draft of a Virginia constitution to write a stunning statement of the colonists’ right to rebel against the British government and establish their own nation based on the premise that all men are created equal and have the inalienable rights of life, liberty, and the pursuit of happiness.

On July 4, 1776, Jefferson’s Declaration of Independence was adopted by the Continental Congress, announcing to the world that the 13 American colonies regarded themselves as independent states and no longer a part of the British Empire. Instead, they formed a union that would become a new nation – the United States of America. Today, Jefferson’s masterpiece is on permanent exhibit in the Rotunda at the National Archives Museum in Washington, D.C. There it rests, the most cherished piece of paper not only in the United States, but to every person the world who values liberty and freedom.

You will never be able to hold the fragile original document in your hands, and even the 200 or so copies that were officially commissioned in the 1820s for dignitaries and the Declaration’s surviving signers are out of reach for most people, In fact, one of those copies sold in February of 2019 for $975,000 at Sotheby’s in New York! But now you CAN secure your own facsimile of this celebrated manuscript to proudly display in your home or office. It’s a striking 8½" x 11" reproduction of the original document complete with the full text. It’s perfect for every American and makes a perfect gift for any youngster just learning about our nation’s great history!