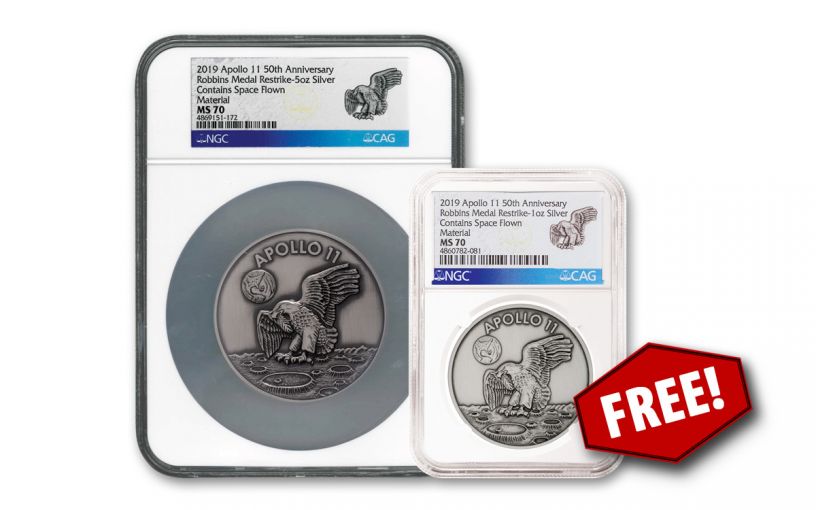 Availability: Out of Stock
This item is currently Out of Stock. Please sign up to be notified if this product becomes available.
Item #
352355
Add to Wish List Add to Wish List Wishlist is for registered customers. Please login or create an account to continue. Add to Compare
Recommended Products
Product Description

Today, the original Apollo 11 Robbins Medals are incredibly coveted collectibles, with a silver space-flown medal recently realizing more than $112,000 at auction. Each medal is a sentimental and important part of the Apollo 11 story – and with this new collectible, you can add a piece of that story to your own collection – an impressive 5-ounce silver commemorative along with the similarly designed one-ounce piece as an added bonus!

The perfect Apollo 11 Commemorative for your collection, it’s struck in five full ounces of highly pure 99.9% fine silver. As an added touch, the medal has been antiqued using authentic Apollo-flown alloy! It also comes graded by the Numismatic Guaranty Corporation (NGC) as being in flawless Mint State-70 (MS70) condition, a distinction that means your perfectly-graded commemorative will have ZERO imperfections – showing all features and fields exactly as the engraver and mint intended.

As part of this “Buy On, Get One” offer, you’ll also receive a bonus One-Ounce Silver Apollo 11 Robbins Medal that features the same images. It was also struck 99.9% silver and was specially antiqued with a space-flown metal alloy that was part of an Apollo mission! It also comes certified and graded by NGC in matching MS70 condition.

Each medal will arrive in its own presentation case and accompanied by a numbered certificate of authenticity and an informative storycard. Coin collectors, history buffs, fans of space and science, and people who enjoy owning pieces of Americana will all be clamoring for this historic medal. But with a limited edition of just 5,000 five-ounce medals, there are far too few to go around. Order yours now!

If there was ever a numismatic collectible that was described as being “out of this world,” it would be these Apollo 11 Fiftieth Anniversary Commemorative Medals. Secure these commemoratives now and own a piece of history!