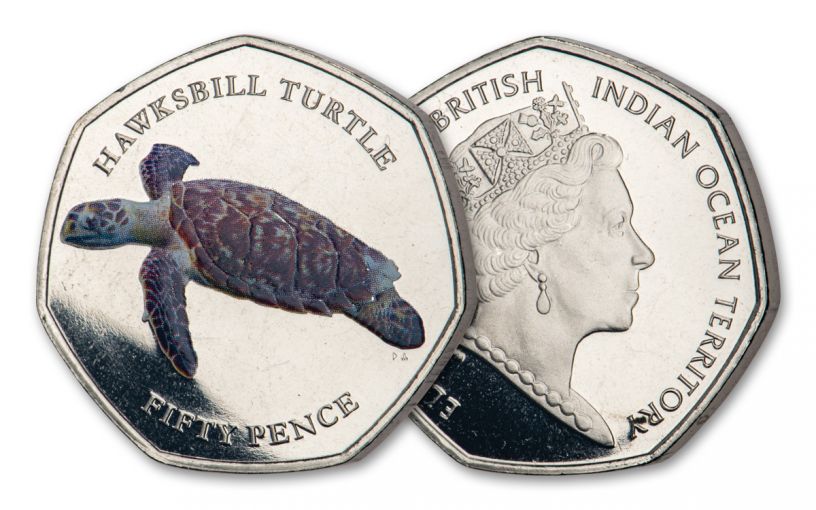 Availability: In Stock
This item will ship within 2 business days.
Item #
354471
Add to Wish List Add to Wish List Wishlist is for registered customers. Please login or create an account to continue. Add to Compare
Recommended Products
Product Description

Here’s a Turtle Coin You Have to “Sea” to Believe!

Have you ever wondered why the animated show SpongeBob SquarePants has never once depicted a sea turtle in all the years it’s been on television? Was it because turtles are hard to draw or because the show’s producers couldn’t find the right voice actor? Nope. It’s because some sea turtles actually like to EAT sponges! One of the biggest sponge gluttons is the Hawksbill Turtle, an aquatic reptile native to the tropical waters of the Atlantic, Pacific and Indian Oceans. Named for their heads that taper into a sharp point that resembles a bird’s sharp beak, Hawksbill Turtles normally avoid deep waters, preferring instead to hide out near reefs where there are plenty of sponges to satisfy their appetites.

Now you can let one of these graceful and exotic sea creatures hide out in your collection thanks to this awesome legal-tender proof coin that features this critically endangered species in full color! Struck by the world-renowned British Pobjoy Mint in eight grams of gleaming Cupronickel (CuNi), this 50-pence coin was expertly crafted from hand-selected planchets, polished dies and multiple strikes to produce beautifully frosted details rising over mirror-like fields.

The seven-sided coin depicts a sleepy Hawksbill in brilliant shades of brown, yellow and white with a shell that resembles a tie dye T-shirt. Upon closer examination, it almost looks like the mellow-looking turtle gliding effortlessly across the face of this coin is winking at you! It’s also the second release in Pobjoy’s Turtle Series and is legal tender in the British Indian Ocean Territory (BIOT), an area that plays an important role in the life of this marine animal thanks to the territory’s shallow inlets which provide much-needed foraging ground for immature turtles.

Hawksbills can grow to nearly four feet in length and weigh as much as 150 pounds. Their distinctive top shell is brightly colored and features a series of overlapping bony plates and serrated edges. Another formidable aspect about these unique sea turtles is a pair of claws that adorn each flipper, making them a dangerous adversary for the likes of predators such as sharks, crocodiles and octopuses. And despite their internationally protected status, they are also hunted by humans for their meat and eye-catching shells.

The 2019 BIOT 50-Pence 8-gm CuNi Hawksbill Turtle Colorized Proof is one of the wildest coins you’ll ever see! Don’t wait; add it your collection today!