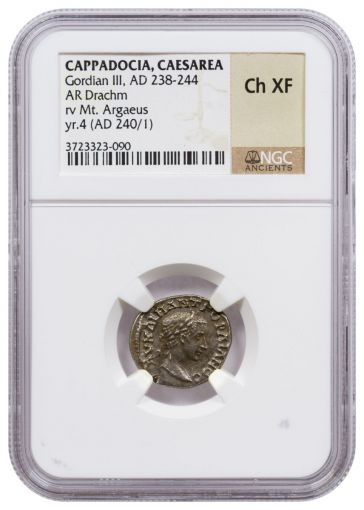 Availability: Out of Stock
This item is currently Out of Stock. Please sign up to be notified if this product becomes available.
Item #
320793
Add to Wish List Add to Wish List Wishlist is for registered customers. Please login or create an account to continue. Add to Compare
Recommended Products
Product Description

Imagine your life at the age of 13. You’d just be entering puberty and speaking in longer, more complex sentences. Your voice will start to crack, your skin will start getting oily, and acne may appear on your face. Now imagine if at this moment in your young life you suddenly discovered that you were the most powerful person on earth. Entire armies would move at your command and laws would be enacted at your whim. Such was the life of Roman Emperor Gordian III, who at the age of 13 became the youngest sole legal Roman emperor in the entire existence of the empire.

Unfortunately for Gordian, his reign lasted only six years before his was assassinated. Anything he might have accomplished as an adult became nothing more than the fleeting dreams of boyhood. While six years may not seem like a long time, it was time enough for Gordian to strike these wonderful coins commemorating Mount Argaeus. While Gordian may be long gone, these ancient coins issued during his reign have survived for nearly 1,800 years!

Known as Mount Erciyes today, Mount Argaeus is a volcanic mountain located in the Roman Imperial province of Cappadocia that is now central Turkey. The highest mountain in Asia Minor, Mount Argaeus got its name thanks to its white-capped summit – Argaeus means “bright” or “white.” It was also sacred to the civilization of Cappadocia due to its status as a deity to the early inhabitants of the region, who were no doubt impressed by its volcanic rumblings. These coins were minted in Caesarea, a city named after Caesar Augustus located near the base of the gigantic mountain.

This Silver Drachm was struck during the fourth year of Gordian’s reign, sometime around AD 240/1. The youthful emperor is depicted on the obverse wearing the cloak and armor of am officer along with his name, title and year of service in Greek. The coin’s reverse illustrates Mount Argaeus edged in flames, representing the mountain’s volcanic properties, with a pellet in the upper left field, surrounded by the Greek inscription MHTPO KAICA BNE commemorating Mount Argaeus, a beaded border and the date.

Each Silver Drachm available in this offer has been certified and graded by the Numismatic Guaranty Corporation (NGC) as being in Choice Extremely Fine (Ch XF) condition. Each will exhibit complete design details and lettering with visible wear on the highest surfaces. Commemorate a fascinating time and place from the Roman Empire by adding one of these magnificent ancient coins to your collection today!