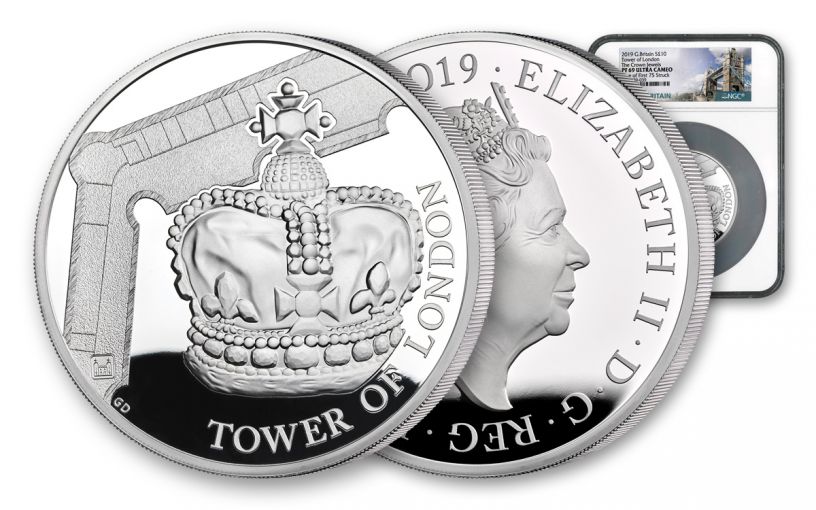 Availability: Out of Stock
This item is currently Out of Stock. Please sign up to be notified if this product becomes available.
Item #
348831
Add to Wish List Add to Wish List Wishlist is for registered customers. Please login or create an account to continue. Add to Compare
Recommended Products
Product Description

When Great Britain’s Queen Elizabeth II was crowned on 2 June 1953 in Westminster Abbey, millions of people in the United Kingdom gathered to witness the extraordinary day, crowding around television sets that had sold in unprecedented numbers in the weeks beforehand. The 1953 coronation was an unforgettable event with the high point being the moment when the Archbishop of Canterbury gently placed Saint Edward’s Crown on The Queen’s head.

Weighing nearly 5 pounds, Saint Edward’s Crown is not only the centerpiece of the coronation regalia, but the most recognizable piece of the United Kingdom’s famous Crown Jewels, a collection of more than 140 ceremonial objects owned by the British Crown. Kept in the Tower of London, they are glorious symbols representing 800 years of the monarchy. Visit the Tower of London on the north bank of the River Thames, and you’ll get a chance to see the famous Crown Jewels up close.

If you don’t want to wait to travel all the way to England, you can see the Crown Jewels up close right from the comfort of your living room with this fantastic new coin from Great Britain’s Royal Mint. This £25 legal-tender coin is struck in a quarter ounce of highly-pure 99.9% fine silver. The second release of The Mint’s Tower of London series, it depicts a Coronation Crown, along with a portion of the Tower’s outer wall. You can put all four parts of the series together to complete the image, but only if you secure this second release while it’s still available!

Each 2019 Great Britain £10 Tower of London Crown Jewels Five-Ounce Silver Proof available in this offer has been graded by the Numismatic Guaranty Corporation (NGC) as being in near-perfect Proof-69 Ultra Cameo (PF69UC) condition, a distinction that means your almost-flawless proof will showcase an impressive full strike and indistinguishable imperfections – well above and beyond the quality of the vast majority of coins in the series. In addition, NGC has certified that these proofs were among the first 75 struck!

Best of all, you can secure your piece of the Crown Jewels without running the risk of getting nabbed while trying to sneak it past the many levels of security. After all, there has been only one semi-successful theft of the Crown Jewels, and that was way back in 1671 when Irish rogue Thomas Blood disguised himself as a parson and over a period of weeks ingratiated himself with the 77-yearold Deputy Keeper of the Jewel House. Blood and his accomplices managed to make off with crown, a scepter, and an orb, but were apprehended at the castle perimeter before they could make good on their escape. His punishment? He was pardoned by King Charles II, who history has described as having a unique fondness for audacious scoundrels!

Your coin will come beautifully presented in its original government packaging from the mint; a sleek black display box accompanied by an informative booklet. Only 585 of these five-ounce silver proofs will be struck, so reserve yours now!

The United Kingdom’s Crown Jewels are one of the world’s most valuable collections. Secure one of these fabulous Tower of London proofs and add a touch of royalty to your collection!