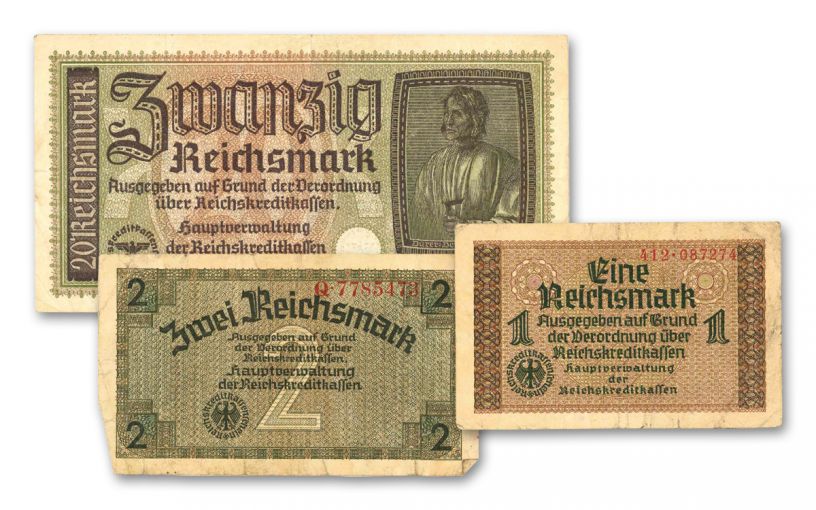 Availability: In Stock
This item will ship within 2 business days.
Item #
349305
Add to Wish List Add to Wish List Wishlist is for registered customers. Please login or create an account to continue. Add to Compare
Recommended Products
Product Description

As the terror of Nazi Germany’s Third Reich spread across Europe, new legal-tender notes were put into circulation alongside the local currency of each town, city and country that had been forcibly incorporated into the Reich. These German Reichmark notes are examples of those currency, preserved since World War II and now available for your collection.

Since ancient times, money has always been a useful tool in the hands of a cunning propagandist. How better to assert control over the populace than by plastering one’s message on the money the citizenry must use in everyday commerce. And in the hands of Nazi dictator Adolf Hitler and his devious propaganda minister Joseph Goebbels, this propaganda strategy was used to chilling and diabolical effect, forcing its way into the subconscious day in and day out, eventually becoming part of the national psyche. These occupation notes often incorporated traditional images like landmarks, young people in native costumes and scenes related to farming and industry. But the underlying theme touting der Führer’s authority was always there in the form of the ever-present German Eagle and Nazi swastika.

In this offer, you’ll receive not one, not two, but THREE authentic Nazi Germany Occupation Notes – a 1 Reichsmark, 2 Reichsmark and 20 Reichsmark – each with the German Eagle and swastika clearly printed on its face. Each note was printed between 1939 and 1945 as the Second World War raged across Europe. This is authentic World War II history you can hold in your hands – real pieces of Nazi Germany’s ruthless occupation under which so many suffered. Secure yours today before our limited supply is lost to the history books.

Don’t let these important pieces of history fade away. Add this three-piece set to your collection and you’ll be able to share the story behind these notes with friends and family for many years to come.