135-40 BC Judaea Bronze Prutah of Hyrcanus 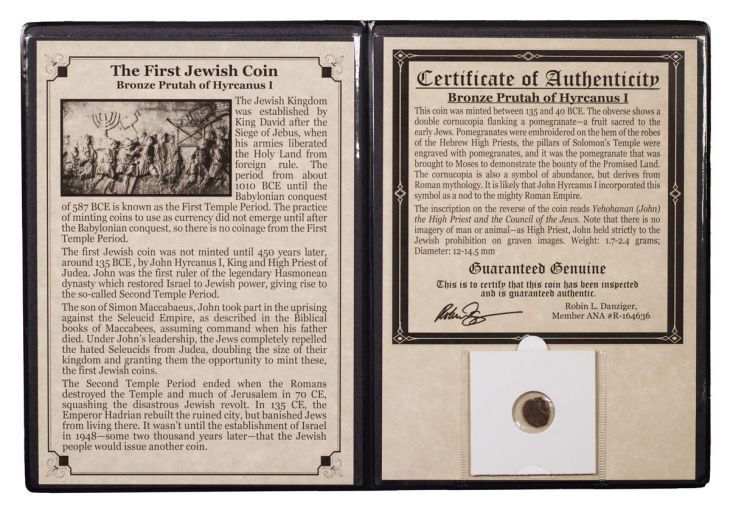 Availability: Out of Stock
This item is currently Out of Stock. Please sign up to be notified if this product becomes available.
Item #
320074
Add to Wish List Add to Wish List Wishlist is for registered customers. Please login or create an account to continue. Add to Compare
Recommended Products
Product Description

The First Jewish Coin from the Holy Land

During the First Temple Period of the Jewish Kingdom of Judaea from 1010 to 587 BC, no coins were struck or circulated. It was not until the Second Temple Period some 450 years later that the first Jewish coins were minted during the reign of King Yehohanan (John) Hyrcanus I, the first ruler of the legendary Hasmonean dynasty which returned Israel to Jewish control. Hyrcanus was able to ascend to the highest rank in the Jewish Kingdom thanks to an unfortunate series of events. He was absent from a banquet attended by his father and two brothers during which they were murdered by Hyrcanus’ brother-in-law, Ptolemy, the governor of Jericho.

Though not technically a “king,” Hyrcanus became the high priest of Judaea, which meant he essentially was the king and is often referred to as such in the history books. Under his leadership, the Jews were able to fend off an invasion by the Seleucid Empire – which had appointed by Ptolemy to his post – and doubled the size of their kingdom. It was during this time that they also minted their first coins, these bronze prutahs. Hyrcanus reigned from 134 until his death in 104 BC and these coins continued to be struck until the end of the Hasmonean Dynasty in 37 BC when it was supplanted by the Herodian Dynasty.

This example of the first Jewish coin measures 12-14.5 mm in diameter. While a wreath is shown on one side framing a Hebrew inscription which translates to “Yehohanan the High Priest and the Council of the Jews,” the coin’s obverse showed the growing influence of the Romans. It is there that you will see a double cornucopia curving around a pomegranate at the center of the coin. The pomegranate was one of the most celebrated products of Palestine, a sacred fruit to the early Jewish civilization. However, it is interesting to note the use of a cornucopia since that particular symbol derives from Roman mythology. Many coin experts agree that it was probably used as a nod to the power of the mighty Roman Republic – already the major power in the Mediterranean and a soon-to-be Empire with the coming of the first Roman Emperors by the close of the 1st Century BC.