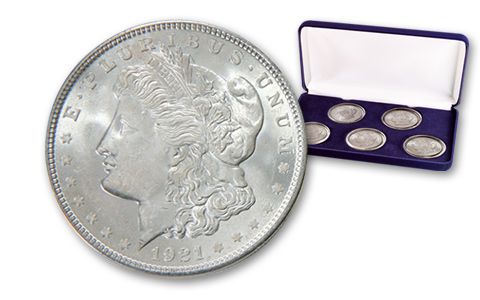 Availability: Out of Stock
This item is currently Out of Stock. Please sign up to be notified if this product becomes available.
Item #
226189
Add to Wish List Add to Wish List Wishlist is for registered customers. Please login or create an account to continue. Add to Compare
Recommended Products
Product Description

One of the Greatest Silver Hoards of All-Time

In the early 1960s, when the U.S. Treasury began liquidating its supply of silver dollar bags at face value, the news spread like wildfire. Soon, coin enthusiasts from all over the country swarmed into Washington D.C., hoping to find scarce dates and mintmarks. By 1964, the lines of collectors snaked for blocks around the Treasury building. Finally the government closed the sale of coins, and brought the commotion to an end once and for all. More than 40 years later savvy collectors recognize the importance of obtaining coins that originated from this hoard. Now, while our supply lasts, you can get a five-piece collection of handpicked key-date Morgans from this famous hoard!