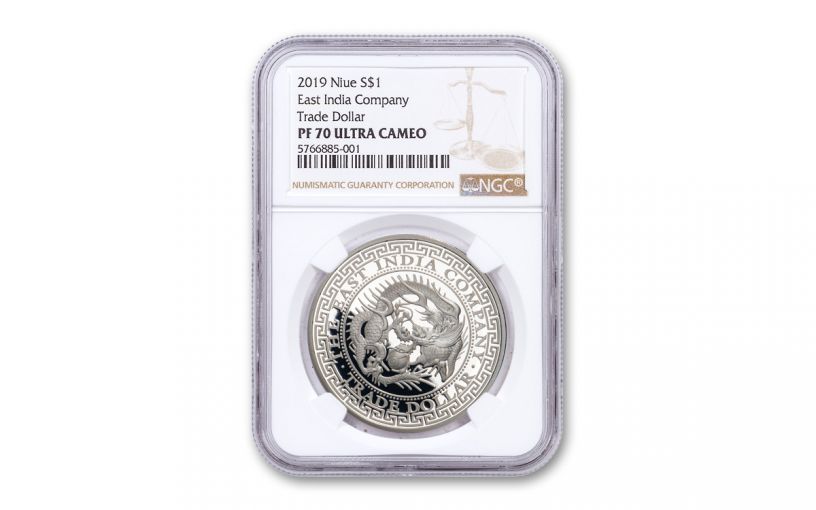 Availability: Out of Stock
This item is currently Out of Stock. Please sign up to be notified if this product becomes available.
Item #
352960
Add to Wish List Add to Wish List Wishlist is for registered customers. Please login or create an account to continue. Add to Compare
Recommended Products
Product Description

Struck in a full ounce of highly pure 99.9% silver, this $1 Niue legal-tender coin is a carefully crafted restrike of the original Japanese Trade Dollar. The introduction of this important coin effectively marked the end of Japan’s isolated feudal society and ushered in the first half of the Empire of Japan. The first coins were originally struck on presses from the former Hong Kong Mint and depicted a fearsome mythical dragon coiled around the treasured pearl of wisdom. A sea creature, the Japanese dragon is called a Ryū and was often used as a symbol of the emperor – in this case it embodies Emperor Mutsuhito, who became known as Meiji the Great after proclaiming that his reign would be one of Meiji or “enlightened rule.”

The East India Company’s 2019 One-Ounce Silver Japanese Trade Dollar is the fourth coin in a five-year series. Other coins include the British, Chinese, French-Indonesian and U.S. Trade Dollars. The series pays tribute to the most popular and sought-after trade pieces issued from the late 1800s to the early 1900s.

Each 2019 Niue One-Ounce Silver Japanese Trade Dollar Proof available in this offer has been graded by the Numismatic Guaranty Corporation (NGC) as being in flawless Proof-70 Ultra Cameo (PF70UC) condition, a distinction that means your perfectly-graded proof will have ZERO imperfections – showing all features and fields exactly as the engraver and mint intended.

Just 1,500 silver proof coins are available for worldwide release – each a lasting tribute to a currency born out of commerce and trade. That’s an incredibly limited mintage for all the historians, coin collectors and silver stackers around the world who would like one of these coins! Don’t miss this chance to secure one for your collection! Secure this gorgeous silver Japanese dragon coin now before it’s once again lost to the history books.

These coins are expected to sell quickly – and with a small mintage of just 1,500 worldwide, our limited supply will not last long. Order yours today!