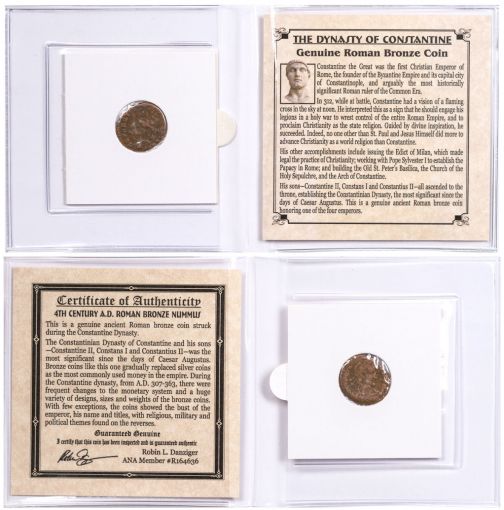 Availability: Out of Stock
This item is currently Out of Stock. Please sign up to be notified if this product becomes available.
Item #
320791
Add to Wish List Add to Wish List Wishlist is for registered customers. Please login or create an account to continue. Add to Compare
Recommended Products
Product Description

The Family Drama That Rocked the Roman Empire

The Constantinian Dynasty was perhaps the last great epoch of the ancient Roman Empire. It was a period of Roman Imperial civilization founded in AD 306 by Roman Emperor Constantine the Great that lasted until 363. It was also an era fraught with enough drama to make even the cheesiest Hollywood soap opera writer blush.

Take Constantine’s first-born son Crispus, for example. For 20 years, Crispus stood at Constantine’s side. No expense was spared on the boy’s education and it was obvious the two loved each other deeply. There was just one problem; Crispus was the son of Constantine’s first wife, Minervina. By the time Crispus had reached full adulthood, Constantine’s second wife, Fausta, was pushing for her sons to succeed Constantine. It was at this point that Fausta told Constantine that Crispus had tried to rape her. The details are rather sketchy after that as Constantine ordered all mention of Crispus removed from the history books. What IS known is that Crispus was executed on his father’s orders. A few months later Fausta was drowned in an overheated bath. We’ll never know if Fausta set Crispus up or if there was a real romantic entanglement – or even if Fausta’s last child was the daughter of Constantine or Crispus!

As emperor, Constantine was one of Rome’s best. Not only did he enact many administrative, financial, social and military reforms that strengthened the empire, he also issued the Edict of Milan in 313, which made it legal for Christians to freely practice their religion throughout the empire. On his deathbed, Constantine became the first Roman Emperor to convert to Christianity. Before he died, he also set in place a plan to divide his empire between his sons and nephews:

In the 25 years following Constantine’s death in 337, his sons would fight over the empire while trying to put down revolts and invasions of their own territories. Constantine II was killed in 340 when he tried to take control of Italy away from Constans. Despite being a mostly able ruler, Constans was killed by his own troops in 350 for showing favoritism to his barbarian “bodyguards” and his not-so-secret life of homosexuality. Constantius II died of illness in 361 while on his way to a final showdown with his cousin Julian. That left Julian as the sole emperor, but his reign was short-lived as he died in 363 from wounds received in battle against a Persian army near their capital at Ctesiphon.

During this this period, the bronze Nummus became one of the most circulated coins of the Roman Empire, replacing the silver coinage of the previous century. The obverse of each coin typically featured the laureate portrait of the reigning Emperor, surrounded by a legend describing the ruler's name and title. Reverse imagery varied, depicting political themes, religious philosophies, and military conquests, illustrated by an additional image of the Emperor or with the symbolism of a god or goddess.

This Bronze Nummus of the Constantinian Dynasty will come packaged in a clear plastic sleeve, accompanied by a signed Certificate of Authenticity from the American Numismatic Association. It will be accompanied by a storycard that gives a brief description of the Constantinian Dynasty, its rulers, and accomplishments. These coins prove that blood is thicker than water – especially if it’s spilled by another family member! Grab your share of the empire with one of these fantastic coins!