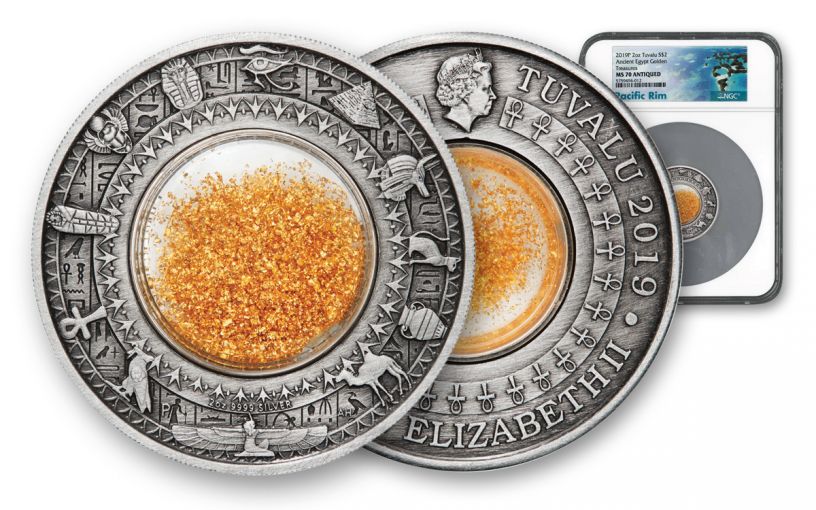 Availability: Out of Stock
This item is currently Out of Stock. Please sign up to be notified if this product becomes available.
Item #
352647
Add to Wish List Add to Wish List Wishlist is for registered customers. Please login or create an account to continue. Add to Compare
Recommended Products
Product Description

Thanks to its many tombs, pyramids and temples, the grandeur of ancient Egypt still exists today. These great physical artifacts combined with a history that predates the written word has given Egyptian culture an enduring popularity that has long had an alluring hold over archeologists, travelers and historians the world over. And now coin collectors can be added to this list of people captivated by Egypt’s spellbinding mysteries thanks to an exotic new release fittingly titled “The Golden Treasures of Ancient Egypt.”

Struck in two full ounces of 99.99% pure silver by Australia’s world-renowned Perth Mint, this coin is decorated with an impressive array of hieroglyphics and symbols that will transport you back to a time when the Great Pyramids of Egypt were constructed some 4,500 years ago. Some of the symbols include the Udjat Eye of Ra, Isis, Anubis, Horus, as well as other animals and artifacts. On the obverse you’ll see a ring of ankh crosses – the ancient Egyptian symbol of life – topped by the portrait of Queen Elizabeth II. Your 2019 Tuvalu Two-Ounce Silver Golden Treasures of Egypt Coins also features a unique antiqued finish and will come certified by the Numismatic Guaranty Corporation (NGC) as being in flawless Mint State-70 (MS70) condition, a distinction that means your perfectly-graded coin will have ZERO imperfections – showing all features and fields exactly as the engraver and mint intended.