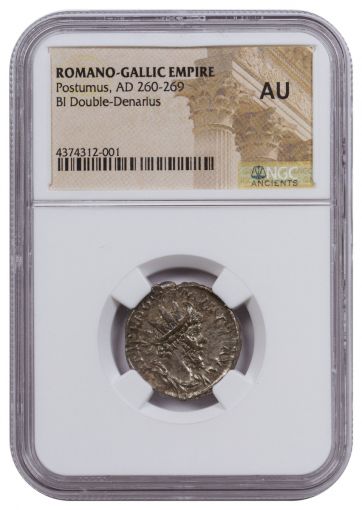 Availability: Out of Stock
This item is currently Out of Stock. Please sign up to be notified if this product becomes available.
Item #
320792
Add to Wish List Add to Wish List Wishlist is for registered customers. Please login or create an account to continue. Add to Compare

Ancient Coins from the Man Who Made Himself a King

The Crisis of the Third Century was a dark time for the Roman Empire. Lasting from about AD 235-284, it saw the empire nearly collapse due to invasions, rebellions and a multitude of usurpers for the title of emperor almost too numerous to name. One usurper, Pothumus, almost made it stick but was ultimately done in by his own aversion to unnecessary violence and cruelty. An extremely competent general and administrator who proclaimed himself emperor of Gaul (modern-day France), Postumus ruled his domain almost unchecked for nearly a decade.

The sequence of events that elevated Postumus to his exalted position began in 260 when Emperor Valerian was captured by forces of the Sassanid Empire of Persia. That left Valerian’s son Gallienus as the sole emperor and in control – albeit tenuously – of both the eastern and western halves of the empire. Taking advantage of the instability in Rome, Postumus was proclaimed emperor of Gaul by his troops and fought off a pair of campaigns led by Gallienus. Since Postumus never sought to march on Rome or gain control of the entire empire, Gallienus instead focused his attention on the invasions in the east. Postumus met his end when he was challenged by one of his own generals. After defeating the usurper Laelianus at the battle of Mogontiacum (modern-day Mainz, Germany) in 268, Postumus was killed by his own troops because he forbade them to sack the city. Without the steady hand of Postumus to guide it, the Romano-Gallic Empire quickly declined. The short-lived break away Empire was finally retaken by Emperor Aurelian in 274.

This stunning Double Denarius of Romano-Gallic Emperor Postumus was struck from AD 260-269, from billon, a metallic alloy containing bronze with a thin coating of silver. And image of a crowned Postumus resplendently dressed in his battle armor is featured on the obverse along with the legend IMP C POSTVMVS P F AVG meaning “Commander Caesar Postumus: Pious, Happy Emperor.” The coin’s reverse depicts the goddess Felicitas standing with a long caduceus in her right hand, a cornucopia in her left, accompanied by the inscription FELICITAS AVG “The good fortune of the Emperor.” Felicitas was the goddess or personification of success and good luck, and a prominent symbol of wealth and prosperity on Roman coinage.

Each coin available in this offer has been certified and graded by the Numismatic Guaranty Corporation (NGC) as being in About Uncirculated (AU) condition and exhibits a remarkable strike and surface conditions. The details of its designs are design are all complete with traces of wear only at the highest points, and more than half of its original Mint luster remaining. Add this museum-quality piece to your collection today before you find yourself amidst the Crisis of the 21st Century!