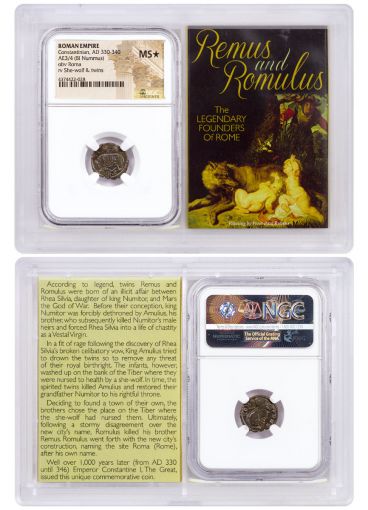 Availability: Out of Stock
This item is currently Out of Stock. Please sign up to be notified if this product becomes available.
Item #
320789
Add to Wish List Add to Wish List Wishlist is for registered customers. Please login or create an account to continue. Add to Compare
Recommended Products
Product Description

How did Rome, the famous Eternal City of the Roman Empire come to be? According to ancient Roman folklore, it’s a story that sums up Roman logic, politics and pride all in one tale. The story starts with the twins Remus and Romulus who as babies were abandoned on the banks of the Tiber River. They were rescued by a she-wolf who suckled them until they were found by a herdsman. When they grew to adulthood, the brothers decided to build a city for themselves but could not agree on a location. The argument was settled when Romulus killed his brother and named the city after himself.

Fast forward 1,000 years later and Roman politics was still very much ensconced in a murder-your-way-to-the-top style of career advancement. It was at this time, however, that the Roman Empire was ruled by Emperor Constantine the Great, one of the most able leaders in the Empire’s long history, and the first emperor to convert to Christianity. To celebrate the founding of Rome 1,000 years earlier, Constantine issued these 3/4 Bi Nummus coins.

The coins also served a dual purpose. Not only did they commemorate the founding of Rome, but they were also issued to celebrate the new Roman capital in Constantinople, Constantine’s hand-picked site in the Empire’s Eastern division. Constantinople proved to be a good choice and when Rome fell in 476, Constantinople remained the capital of the Eastern Roman Empire for another 1,000 years.

The twins Remus and Romulus are featured on one side of these coins while the Goddess of Rome is featured on the obverse wearing imperial robes along with the legend URBS ROMA “city of Rome.” This beautiful coin is a fantastic piece of history that comes in an equally fantastic grade. Measuring approximately 17 mm in diameter and composed of a copper and bronze alloy, it has been certified and graded by the Numismatic Guaranty Corporation (NGC) as being in in gorgeous Mint State (MS) condition with a special star (*) designation. Only a select few coins ever receive the star designation, which denotes superior eye appeal.

Your coin will also come beautifully displayed in a Story Vault holder that includes a fact-filled storycard that recounts Rome’s foundation story. Make it a treasured part of your ancient coin collection and click it to your cart today!