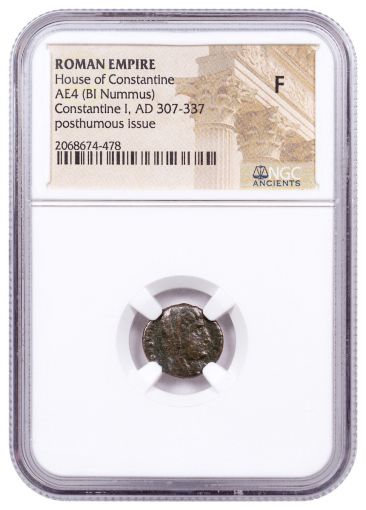 Availability: Out of Stock
This item is currently Out of Stock. Please sign up to be notified if this product becomes available.
Item #
320797
Add to Wish List Add to Wish List Wishlist is for registered customers. Please login or create an account to continue. Add to Compare

Touch the Hand of God with this Ancient Bronze Coin

When Roman Emperor Constantine the Great died in AD 337, the House of Constantine – his sons Constantine II, Constans and Constantius II – decreed that posthumous bronze coins be struck that clearly depicted Constantine being carried to Heaven in a Quadriga. The Quadriga was a Roman chariot drawn by four animals, usually horses, and was the customary vehicle for triumphant processions to honor the victorious, as well as being used in the funeral ceremony of an Emperor’s consecration.

But more than the symbolic pomp and grandeur, what makes these legendary Bronze Nummus coins so significant is that they literally bear the Manus Dei – the Hand of God – extending from Heaven to welcome the great Emperor home. This was the first depiction of the Christian God on a Roman coin! Known examples of this amazing coin bear dates from 337 – 340. What’s more, the image is eerily similar to Michelangelo’s Creation of Adam painted on the ceiling of the Sistine Chapel 1,200 years later. Was this just a coincidence, or did the Renaissance artist use this coin as a model? Compare the coin to the painting and decide for yourself.

This posthumous Roman Imperial Bronze Nummus of Constantine I has been certified and graded by the Numismatic Guaranty Corporation (NGC) as being in Fine (F) condition, meaning it is a coin that was heavily circulated in its time and will have moderate to considerable wear with some design detail remaining in the deeply recessed areas. In addition, each coin in this offer has been inspected and guaranteed to be authentic by a member of the American Numismatic Association and will come with a Certificate of Authenticity along with a narrative describing the impact of Constantine’s reign. Now nearly 1,700 years old, this “Hand of God” Roman bronze coin of Constantine the Great is an ancient heirloom that can be found in museum archives and some private collections around the world.