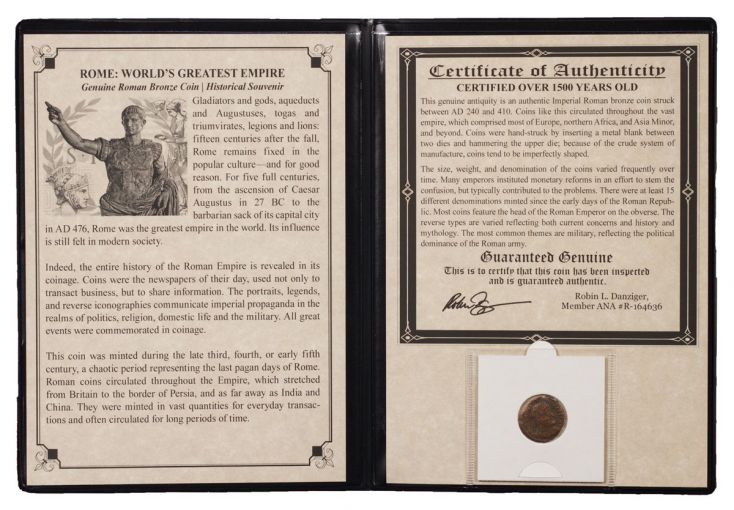 Availability: Out of Stock
This item is currently Out of Stock. Please sign up to be notified if this product becomes available.
Item #
320076
Add to Wish List Add to Wish List Wishlist is for registered customers. Please login or create an account to continue. Add to Compare

Hold the Glory of Rome in the Palm of Your Hand

Say the word “Rome” and most people think of sun-kissed piazzas, stars over the Mediterranean, mouth-watering cuisine and historic landmarks that are spellbinding reminders that the past is always present. That past is filled with stories of grandeur, conflict, drama and tales of the Roman Empire – the World’s Greatest Empire.

Now you can hold the glory of Rome in the palm of your hand with this ancient bronze coin struck during the decline and fall of the Roman Empire. Each coin available in this offer was struck from AD 240-410 – a period that saw the Empire reach new heights and sink to new depths of depravity. These coins are like postcards from the ancient Roman Empire that trace the dramatic history of Roman civilization. Struck by hand more than 16 centuries ago, these coins helped communicate political views, religious beliefs, values of life and military practices. Each coin usually depicts the bust of the issuing emperor on the obverse while an important god, goddess, landmark or military victory is commemorated on the reverse.

Struck for daily circulation within the vast territory of the Roman Empire, these coins were there to witness the rise and fall of family dynasties that fought to hold the title of Caesar Augustus. They were there at the end of the Severan Dynasty founded by Emperor Septimius Severus – the fall of which left a power vacuum that lasted for nearly 60 years. Known as the Crisis of the Third Century, the empire saw no less than 26 emperors lay claim to the throne during this period. The crisis finally came to an end in AD 284 when Emperor Diocletian, who made the government more efficient by dividing the empire into East and West divisions. Further Roman glory followed with the ascension of Emperor Constantine the Great in AD 306. The Constantinian Dynasty that followed was ruled by his sons and nephews and plunged the Empire to new depths of depravity. It wasn’t until Emperor Theodosius I rose to power in AD 395 becoming the last sole emperor to rule both halves of the Roman Empire that order was restored – albeit only temporarily as Rome’s final fall was but only a few decades away.

These are just some of the tyrants, despots and emperors who can be seen on these coins. There are even some examples of coinage depicting members of the ruling families, such as wives, children or an emperor’s designated heir. Each Roman Imperial Bronze Coin will come displayed in a distinctive album portfolio accompanied by a storycard that explains the development and significance of the Roman Empire’s coinage. This stunning album also includes a Certificate of Authenticity signed by a member of the American Numismatic Association, guaranteeing that your coin is a genuine Roman Imperial issue. Don’t wait -- grab your piece of the Roman Empire – The World’s Greatest Empire!