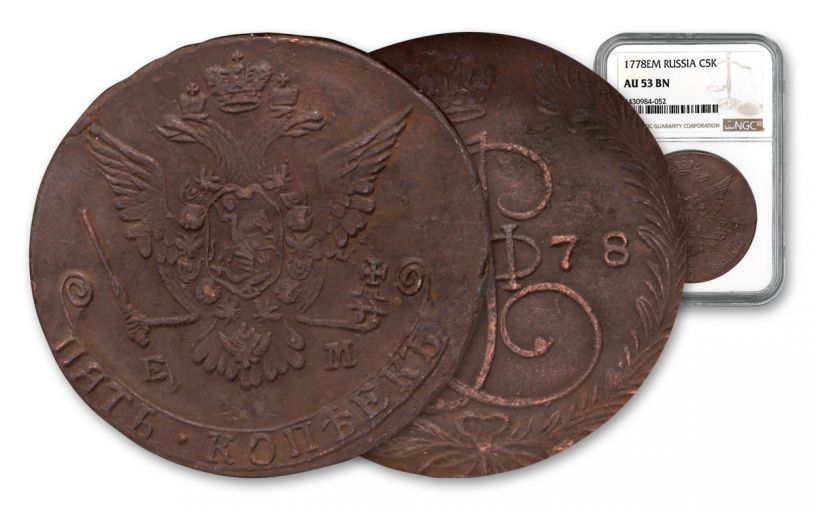 Availability: Out of Stock
This item is currently Out of Stock. Please sign up to be notified if this product becomes available.
Item #
301248
Add to Wish List Add to Wish List Wishlist is for registered customers. Please login or create an account to continue. Add to Compare

Two Heads are Better than One

You didn’t mess with Russia’s Catherine the Great. She came to power in 1762 when she was just 33 years old after orchestrating a coup that forced her estranged husband, Emperor Peter III to abdicate. He was later assassinated making Catherine the undisputed monarch of the world’s largest nation. Despite her ruthless rise to power, Catherine revitalized Russia into one of the great powers of Europe. Today, her long 34-year reign is known as the Golden Age of the Russian Empire.

When it comes to collecting coins from this era few are as impressive as these 5 Kopeks coins struck between 1763 and 1796. Struck when the Empress not only reigned over all of Russia, but during a time when she cast an imposing shadow across much of Europe, these massive copper coins feature the iconic two-headed Russian eagle on one side and Catherine’s crowned monogram on the other. Weighing nearly as much as two U.S. silver dollars, these coins are hefty pieces of history when Russia’s Empress Catherine the Great was without a doubt the most powerful woman in the world!

Your coin has been graded by the Numismatic Guaranty Corporation (NGC) as being in About Uncirculated-53 (AU53) condition and will come sonically sealed in an acrylic holder with a brown NGC label. All the major design elements are visible – a remarkable feat in itself for a widely used coin that’s more than 220 years old! Unlike a Russian winter, these coins won’t last forever so act now to own an important piece of world history! Dates will vary.