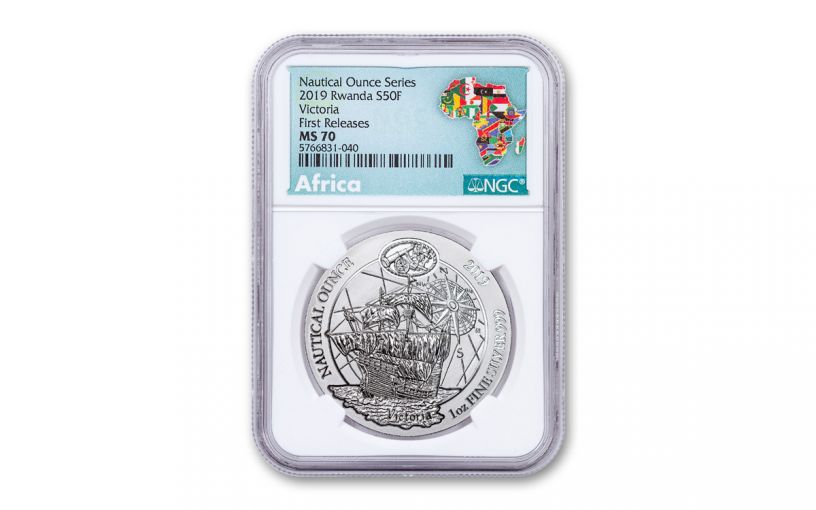 Availability: Out of Stock
This item is currently Out of Stock. Please sign up to be notified if this product becomes available.
Item #
353275
Add to Wish List Add to Wish List Wishlist is for registered customers. Please login or create an account to continue. Add to Compare

Perhaps the greatest sea voyage undertaken during the Age of Discovery – or during ANY era for that matter – was Ferdinand Magellan’s quest to become the first explorer to circumnavigate the globe. Leaving with five ships from Spain on August 10, 1519, Magellan was ultimately successful, though at great cost and loss of life. Of the five ships and 265 men who began the journey, just one ship, the Victoria, and 18 men returned alive three years later.

Now, on the 500th anniversary of the start of its epic round-the-world voyage, the Victoria sails again on the latest coin in Rwanda’s Nautical Ounce Series of maritime-themed coins. The third coin in the series, it’s struck in one full ounce of highly pure 99.9% silver and features the famous three-masted vessel. The Victoria was a type of ship known a “carrack,” an ocean-going ship developed in the 14th and 15th centuries that later gave way to the larger and better-defended galleons.

The Victoria was meticulously built along with its four sister ships at the Ondarroa shipyard in Spain by the Basques, who were recognized as the finest shipbuilders in the world at that time. Victoria received her name in honor of Santa Maria de la Victoria de Triana, the church where Magellan, a noted Portuguese explorer, took an oath of allegiance to Spanish King Charles V. Unfortunately, Magellan never saw the completion of the expedition. He was killed in the Philippines on April 27, 1521 by Mactan natives who resisted his attempts to convert them to Christianity.

Your 2019 Rwanda Nautical Ounce – 500th Anniversary of the Victoria coin has been graded by the Numismatic Guaranty Corporation (NGC) as being in perfect Mint State-70 (MS70) condition, a distinction that means your perfectly-graded coin will have ZERO imperfections – showing all features and fields exactly as the engraver and mint intended. In addition, NGC has graded your Nautical Ounce – 500th Anniversary of the Victoria to be a First Releases (FR) coin, a designation that means your coin was received by NGC or an NGC-approved depository within the first 30 days of its release. Collectors seek out these coins because they are produced with new dies and considered to have sharper strikes and deeper mirrors than those that are struck later.

The Rwanda Nautical Ounce series has been incredibly popular with collectors around the world for its intricate designs and seafaring themes. While a final mintage has not yet been announced, this year’s coin will be minted for one year and one year only with the final coins to be struck in March of 2020. Coveted by both collectors and silver stackers, don’t let your collection set sail without this coin. Click one – or several – to your cart today!

Experience the thrills of the Age of Discovery with the 2019 Rwanda One-Ounce Silver Nautical Ounce Series – 500th Anniversary of the Victoria coin. Order yours now and set sail on your own expedition of discovery!