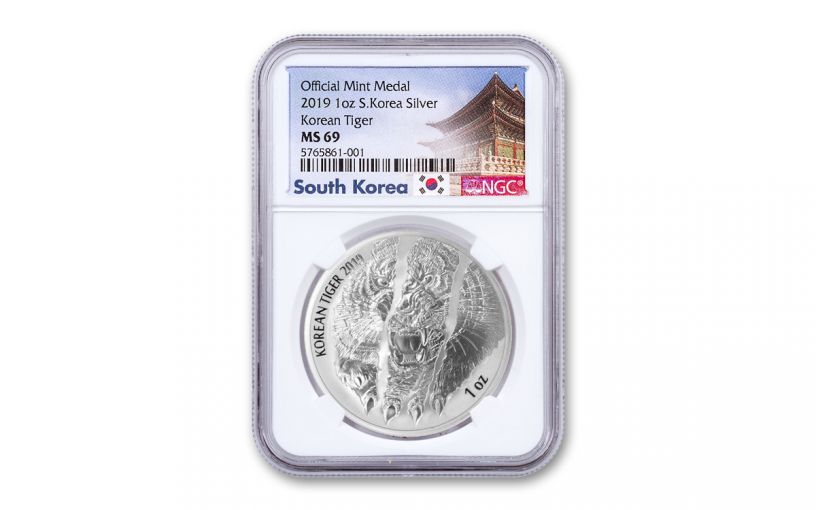 Availability: Out of Stock
This item is currently Out of Stock. Please sign up to be notified if this product becomes available.
Item #
353056
Add to Wish List Add to Wish List Wishlist is for registered customers. Please login or create an account to continue. Add to Compare

Pounce on These Silver Tigers – Before They Pounce On YOU!

South Korea’s Silver Tiger returns for 2019 with a stunningly ferocious design that brings you face to face with the world’s largest cat and one of its most feared predators. The second year in the series struck by KOMSCO, the official mint of South Korea, this year’s one-year-only design features a close-up image of growling tiger, his face a mask of unbridled aggression as he slashes his deadly claws trough the surface of the medal. And if this exciting image isn’t enough to have you pawing for this medal, its one ounce of highly pure 99.9% fine silver will.

When South Korea decided to launch a one-ounce silver bullion medal series in 2018, it came as no surprise that the theme chosen was the Siberian Tiger. An endangered animal that is found today almost exclusively in Eastern Russia, its range once extended throughout the Korean peninsula where is is integral to Korea’s creation myth. Tragically, no tigers are believed to roam the mountains of Korea anymore and their total population numbers only in the hundreds.

Fortunately for you, South Korea’s tiger prowls again on this beautiful silver medal. Each comes graded by the Numismatic Guaranty Corporation (NGC) as being in near-perfect Mint State-69 (MS69) condition, a distinction that means your almost-flawless medal will showcase an impressive full strike and indistinguishable imperfections – well above and beyond the quality of the vast majority of pieces in the series. Plus, each has an added security feature – a lenticular design struck into the silver itself. Visible on the medal’s reverse, the lenticular feature will display either “Ag” or “999” depending on the viewing angle. It will come sonically sealed in an acrylic holder with an exclusive South Korea label.

Just 20,000 of these wonderful Silver Tiger Bullion Medals have been struck for worldwide release – a third less than the inaugural issue in 2018! Combined with their proximity to Chinese collectors, appeal to wildlife enthusiasts, and attractiveness to silver stackers around the world and it all adds up to a relatively small mintage. Add one or more to you cart now!