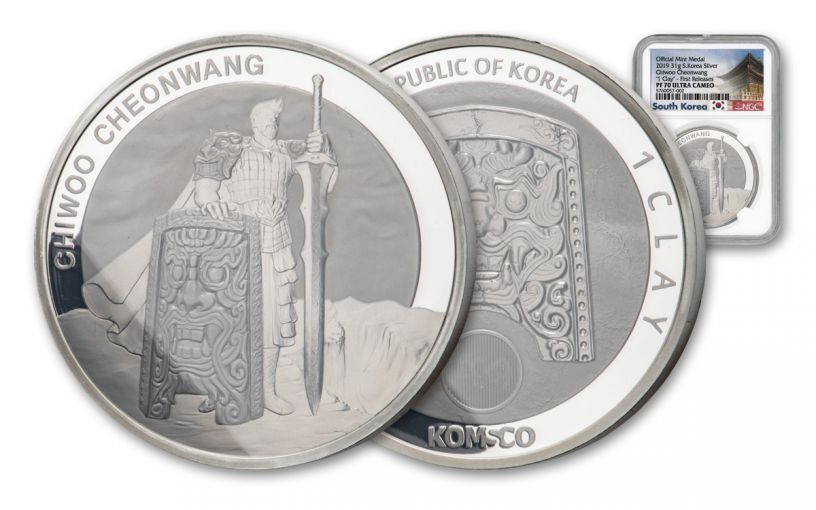 Availability: In Stock
This item will ship within 2 business days.
Item #
350963
Add to Wish List Add to Wish List Wishlist is for registered customers. Please login or create an account to continue. Add to Compare

For many young people, the most significant culture coming out of South Korea these days are boy bands under the umbrella classification of “K-pop.” This Korean Wave of music may have thousands of teenage girls screaming for their favorite singer, but the Asian wave that you’ll really want to ride is South Korea’s latest release in its Chiwoo Cheonwang silver series. First released in 2016, this epic series of silver medals has met with worldwide acclaim, selling out every year. And now the new wave of medals has arrived – and you’ll need to act fast or risk being left in its wake!

The 2019 release features an all-new, one-year-only design struck in a full ounce of highly pure 99.9% silver. It depicts Chiwoo Cheonwang, South Korea’s legendary God of War, surveying a field of battle from high atop a mountain. Along with him are his sword and shield – each a significant symbol of his mighty power and persona. His shield shows the image of Dokkaebi, a supernatural goblin that, despite its grotesque appearance, is a symbol of good luck. The same design is repeated on the medal’s obverse. His massive longsword, standing taller than the indefatigable warrior himself, is a reminder that he is ready at a moment’s notice to take up arms and bring victory to his side.

And you can bet every detail is crisp and clean because your 2018 South Korea Chiwoo Cheonwang One-Ounce Silver Medal has been certified, graded and encapsulated by the Numismatic Guaranty Corporation (NGC) to be in flawless Proof-70 Ultra Cameo (PF70UC) condition, a distinction that means your perfectly-graded proof will have ZERO imperfections – showing all features and fields exactly as the engraver and mint intended. In addition, NGC has also given it a First Releases (FR) certification, which you can see on the exclusive South Korea label inserted inside the protective acrylic holder.

The legendary warrior Chiwoo Cheonwang upon whose life these designs are based on, is the symbol of victory in Korean history and folklore. In battle, he wore a demonic mask that obscured his face and terrified his enemies. Combined with his ability to cast magic spells and control the weather, Chiwoo Cheonwang fought a series of epic battles against China’s Yellow Emperor more than 4,500 years ago. Today his mask serves as the mascot for South Korea’s national soccer team, the Red Devils.

This year’s medal marks the fourth release in the series. And, while incredibly popular both inside and outside of South Korea, the mintage this year is just 1,500! To assure you’re victorious in obtaining one of these gleaming silver treasures, add the 2019 South Korea Chiwoo Cheonwang One-Ounce Silver Proof Medal to your cart today!