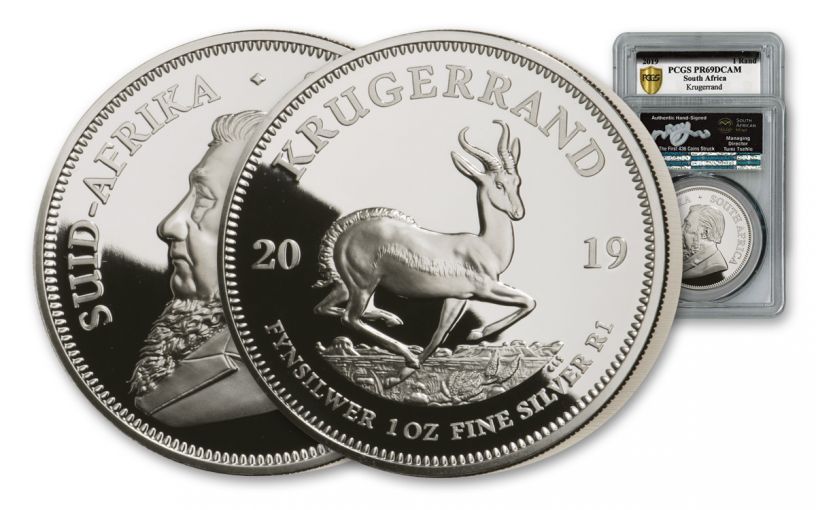 Availability: Out of Stock
This item is currently Out of Stock. Please sign up to be notified if this product becomes available.
Item #
349296
Add to Wish List Add to Wish List Wishlist is for registered customers. Please login or create an account to continue. Add to Compare

Now in its third year of striking these spectacular silver bullion coins, the artisans at the South African Mint are taking the Silver Krugerrand a step further and giving it the luxury treatment! Using specially treated and polished dies along with hand-selected 99.9% pure silver planchets, this 2019 One-Ounce Silver Krugerrand PROOF is the product of multiple strikes and innovative laser-etching technology. The result is a pristine coin that shines with mirror-like surfaces and distinct, razor-sharp details! In fact, your coin has been graded by the Professional Coin Grading Service (PCGS) as being in near-perfect Proof-69 Deep Cameo (PR69 DCAM) condition, a distinction that means your almost-flawless proof will showcase an impressive full strike and indistinguishable imperfections – well above and beyond the quality of the vast majority of coins in the series.

In addition, PCGS has certified that your Silver Krugerrand is one of the first 436 coins struck! Collectors seek out coins like these because they are produced with brand new dies and have sharper strikes and deeper mirrors than those struck later. Also, the population of coins labeled “One of First of 436 Struck” is a small fraction of the total mintage. Plus, each coin in this offer has been specially encapsulated in an acrylic holder with an exclusive label personally signed by South African Mint Managing Director Tumi Tsehlo.