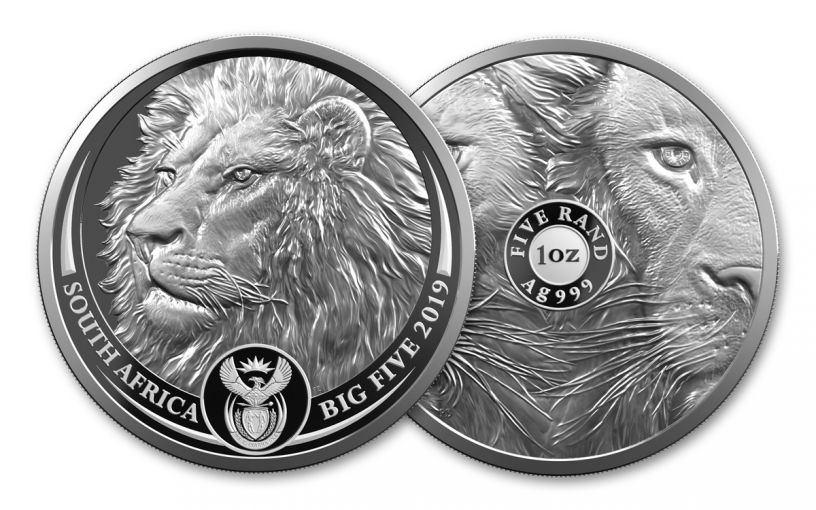 Availability: Out of Stock
This item is currently Out of Stock. Please sign up to be notified if this product becomes available.
Item #
353068
Add to Wish List Add to Wish List Wishlist is for registered customers. Please login or create an account to continue. Add to Compare

The King of the New Big 5? Here’s the Proof!

The South African Mint’s new Big 5 series is already turning heads. The Mint’s success in previous wildlife series – particularly the award-winning Natura series – has earned it a place among the world’s top mints. This beautiful coin is the Proof version of the South Africa’s new One-Ounce Silver Big 5 Lion, struck multiple times under massive weight to produce incredibly sharp, frosted details that hover over the shining field below.

Struck in a full ounce of highly pure 99.9% silver, the obverse of this legal-tender 5-Rand coin depicts an image of an alert male lion in all his regal glory. The reverse features a unique bisected image of a lion’s profile. When multiple coins are placed side by side it creates a complete close-up portrait of a lion staring straight into your eyes. If you dare, put on some thin white gloves and trace your fingers across the rugged design… it almost feels like you’re caressing the tawny body of a real lion!

Just 3,000 of the regal proof coins were ever struck, and what makes them even more hard to secure is the fact that each and every coin was originally released as part of a two-coin set. There’s no telling when these individual Big 5 Lion Proofs will be hunted down to extinction!

Don’t let this “King” of the Big 5 animals out of your sights; bag your 2019 South Africa One-Ounce Silver Big 5 Lion Proof now before these coins escape into the hands of other collectors!