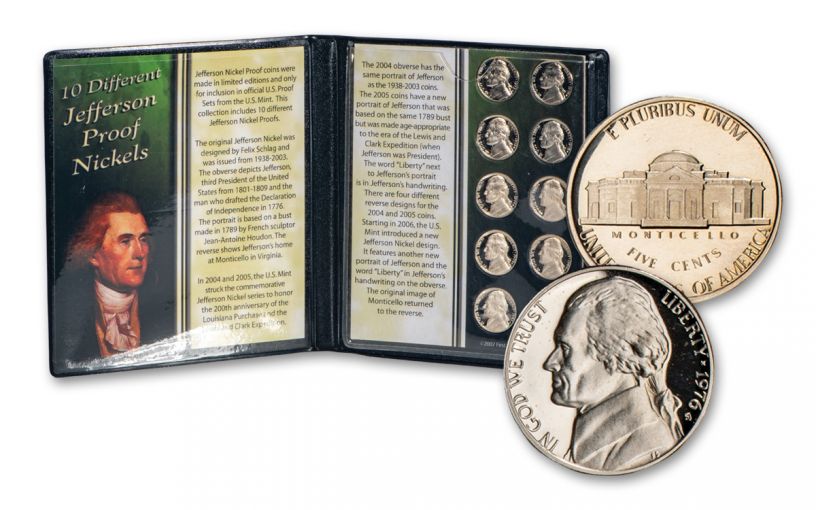 Availability: In Stock
This item will ship within 2 business days.
Item #
351284
Add to Wish List Add to Wish List Wishlist is for registered customers. Please login or create an account to continue. Add to Compare
Recommended Products
Product Description

In 1938, the Jefferson Nickel was minted in honor of Thomas Jefferson. Rather than use an internal designer or engraver, the United States Mint turned to the public for a new design. The winner was Felix Schlag, who won the national competition and received a $1,000 prize.

Struck in 75% copper and 25% nickel, the Jefferson Nickel is an iconic coin, presented best in Proof condition with frosted devices and mirrored fields. Prior to 1968, Proof versions of the Jefferson Nickel were struck in Philadelphia and bore no mint mark, but since 1968 the coins have been struck in San Francisco and now bear that mint’s “S” mint mark.

Originally available only as part of the U.S. Mint’s extremely popular Proof Sets, we’ve compiled 10 different Jefferson Nickel Proofs dated between 1968 and 2019 into one great set. Each set comes housed in a custom display. Dates vary. A great way to start a new collection! Dates will vary.