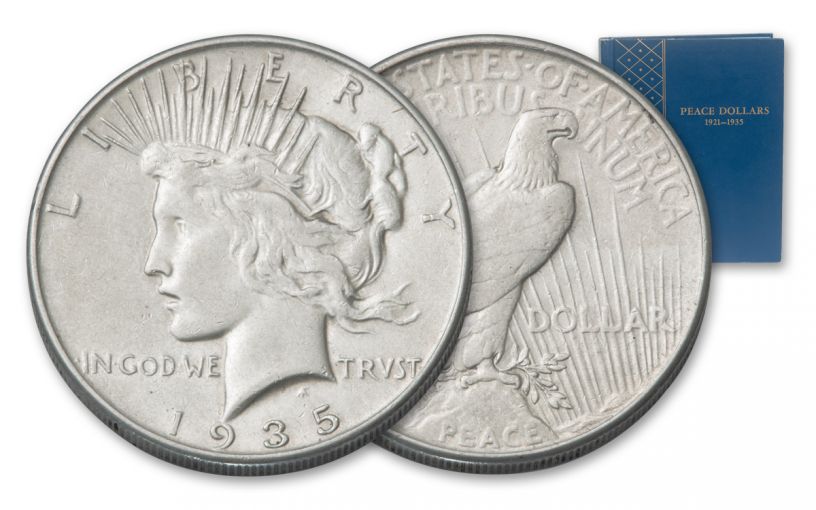 Availability: Call-In Only
This item is only available on a Call-In basis. Please call 1-800-510-6468 to speak to a representative.
Item #
224749
Add to Wish List Add to Wish List Wishlist is for registered customers. Please login or create an account to continue. Add to Compare
Recommended Products
Product Description

The Peace Dollar is the last true American silver dollar series struck by the U.S. Mint in 90% fine silver. Originally intended as a one-year release struck in high relief to commemorate the end of World War I, the series continued to be minted for a total of 10 years between 1921 and 1935, with the last nine releases struck in standard, but no less beautiful, relief.

The design of the Peace Dollar is iconic — appropriate for such an important coin. Designed by 34-year-old Italian-American sculptor Anthony de Francisci, its obverse features the head of Lady Liberty wearing a crown of rays modeled after the design of the Statue of Liberty. The model for Lady Liberty was 23-year-old Teresa Cafarelli de Francisci, the young sculptor’s wife. Imprinted on the coin’s obverse are “LIBERTY,” “IN GOD WE TRUST,” and the year of issue. The reverse features an eagle at rest clutching an olive branch before a rising sun, along with the inscriptions “UNITED STATES OF AMERICA,” “E PLURIBUS UNUM” and the denomination “ONE DOLLAR.”

While every collector enjoys the thrill of the chase, sometimes it’s nice to let someone else do the hunting for you. It’s in that spirit that we present a full set of 90% silver U.S. Peace Dollars, all in Extremely Fine (XF) condition! In this set you’ll receive 24 coins, including the hard-to-find 1928-P, 1934-S and the high-relief 1921-P! The entire set will come beautifully displayed in a custom presentation case and accompanied by a certificate of authenticity. Don’t sweat the details; capture some peace of mind and add this complete set of Peace Dollars to your collection today!

FAMOUS PEACE SILVER DOLLAR – While not produced in the same numbers as the Morgan Silver Dollar, the Peace Silver Dollar series has seen its reputation grow with each passing year. Designed by Anthony de Francisci, it features a design of Lady Liberty on the obverse and a perched eagle on the reverse. It was struck from only 1921 to 1928 and again in 1934 and 1935.

STRUCK IN FINE SILVER – Each Peace Silver Dollar was struck in 26.73 grams of 90% fine silver and measures 38.1 mm in diameter.

LEGAL TENDER U.S. COINAGE – These coins were $1 legal tender in the United States and circulated widely during the Roaring ’20s and Depression-era ’30s.

NICE UNCIRCULATED CONDITION – Each of the Peace Silver Dollar in your set will come in nice Extremely Fine (XF) condition with complete details and only minor wear.