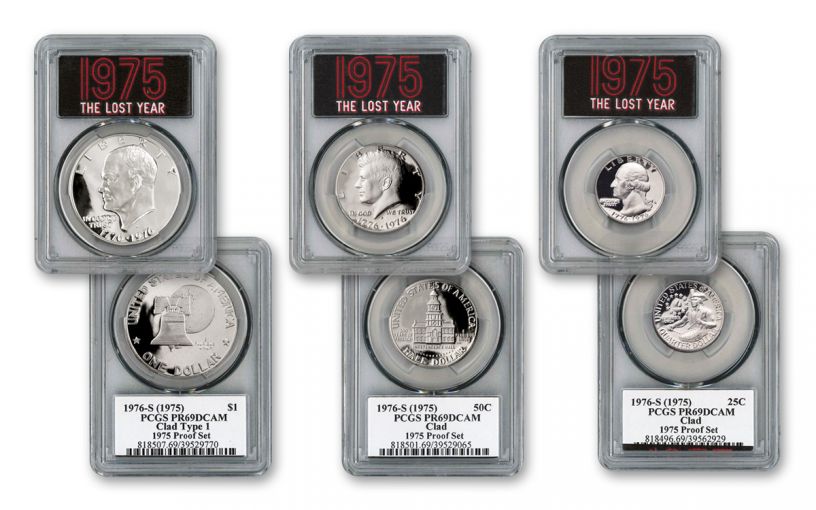 Availability: Out of Stock
This item is currently Out of Stock. Please sign up to be notified if this product becomes available.
Item #
224785
Add to Wish List Add to Wish List Wishlist is for registered customers. Please login or create an account to continue. Add to Compare
Recommended Products
Product Description

In 1975, the U.S. Proof Set contained three coins — the Washington Quarter, Kennedy Half Dollar and Eisenhower Dollar — dated 1976! Could it have been a mistake? A minting error? The work of an engraver that hated 1975 and wished it had never existed? None of the above. Instead, it was due to the creation of special dual-dated coins celebrating the 200th anniversary of the adoption of the Declaration of Independence.

These Bicentennial coins feature dates of both 1776 and 1976, as well as special reverse designs. Interestingly, the Eisenhower Dollar would go on to be revised the following year with slightly different lettering — an important fact for those hoping to know exactly when their Ike Dollar was struck! Luckily, you’ll have no such trouble here, as all three of these coins have been certified by the Professional Coin Grading Service (PCGS) as having been struck in1975. In fact, The Ike Dollar in this set even features a special Type 1 designation on its label to differentiate it from its slightly altered 1976-struck counterpart!

In addition, each coin available here has been graded by PCGS as being in near-perfect Proof-69 Deep Cameo (PR69 DCAM) condition, a distinction that means these almost-flawless coins showcase impressive full strikes and indistinguishable imperfections — well above and beyond the quality of the vast majority of coins in the series. Plus, each coin comes sonically sealed in an acrylic holder with special “1975 The Lost Year” label. A fun oddity in the history of the U.S. Mint, and a great story to share with friends and family!