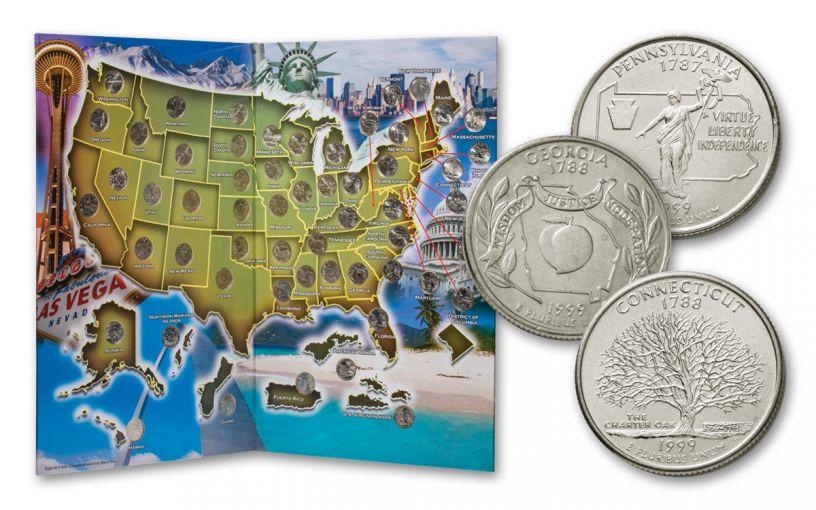 The U.S. Mint’s 50 States Quarters Program that ran from 1999 to 2008 was so popular that it created an entirely new generation of collectors. These coins were released by the mint every 10 weeks in the same order that the states ratified the constitution or were admitted to the Union, with each featuring a unique design based on the state’s history, traditions and symbols. Each was produced for only 10 weeks and never produced again. The first modern circulating coin program with a new design on each coin, the 50 States Quarters Program became the most successful numismatic program in U.S. history with roughly half of the nation’s population collecting the coins in some way.

Now on the 20th anniversary of this groundbreaking release, you can relive the joy of finding the new quarters in your pocket change by securing each and every one of those highly collectible coins in one fantastic collection! Plus, you’ll also receive the highly coveted D.C. and U.S. Territories Quarters that were issued in 2009 – an additional six quarters featuring the District of Columbia, Puerto Rico, American Samoa, Guam, the United States Virgin Islands, and the Northern Mariana Islands.

Each quarter in this full 56-coin set containing all 50 State Quarters as well as the six releases from the U.S. Territories Program comes in remarkable Uncirculated condition. The entire set also comes beautifully displayed in an attractive folder that features a map of the continental United States along with outlines of Alaska, Hawaii, the District of Columbia and the U.S. Territories. It’s perfect for displaying anywhere and can be easily framed to serve as a patriotic piece of art in your home or office.