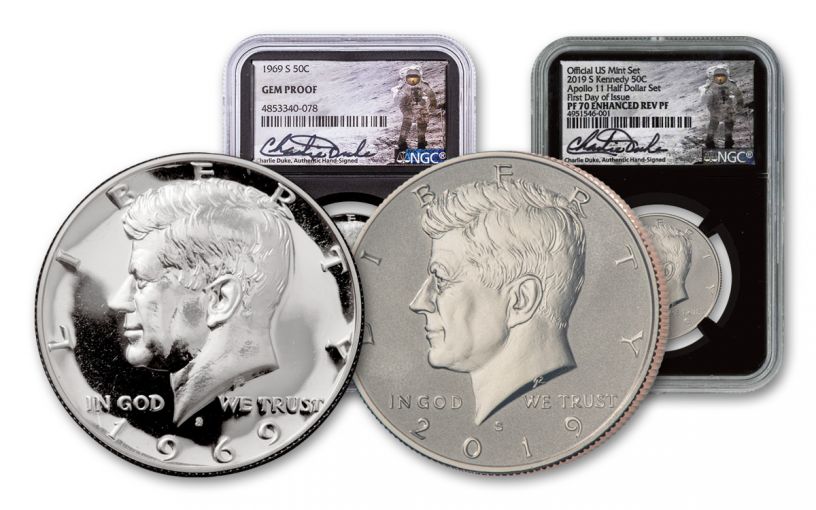 Availability: In Stock
This item will ship within 2 business days.
Item #
350701
CC Payments as low as
$74.63 / month
Add to Wish List Add to Wish List Wishlist is for registered customers. Please login or create an account to continue. Add to Compare
Recommended Products
Product Description

In 1969, the world watched as man first walked on the moon. Many Americans watched those historic first steps with Kennedy Half Dollars in their pockets – physical reminders of President John F. Kennedy’s promise that an American would set foot on the lunar surface before the end of the decade. Fifty years later, President Kennedy’s portrait continues to grace the front of our half dollars, and so we’ve put together this special two-coin set, featuring Kennedy Half Dollars struck in 1969 and 2019.

These aren’t just any half dollars, mind you; these are the best of the best! Each was struck at the San Francisco Mint, respected the world over for the quality of its proof strikes:

To make this set even more spectacular, we’ve partnered with astronaut Charles “Charlie” Duke, who served as CAPCOM (Capsule Communicator) for the landmark Apollo 11 mission. Charlie has left his mark on this two-piece set by personally signing the label encapsulated with each coin. The coins were then sonically sealed in protective acrylic holders with distinctive black display cores.

Serving as the central point of communication between Mission Control and the three-man crew, Duke’s Texas accent not only helped guide astronauts Neil Armstrong, Michael Collins and Edwin "Buzz" Aldrin as they made their momentous journey to the moon’s surface, but became THE voice of Mission Control as his distinctive southern drawl struck a note with television viewers across the world. Three years later, Duke made history of his own as a member of the Apollo 16 mission. Not only was he the tenth man in history to set foot on the moon, but at the age of 36, Duke was – and still is – the youngest person to ever walk on the surface of the moon.

In 1962 when President Kennedy called for the United States to land a man on the moon by the end of the decade, his challenge was boldly met. Sadly, Kennedy never saw his call to action fulfilled. An assassin’s bullet may have cut him down, but America prevailed and completed the task JFK had set out before her. Now you can answer the call. Make your own bold step and add this two-piece set to your collection!