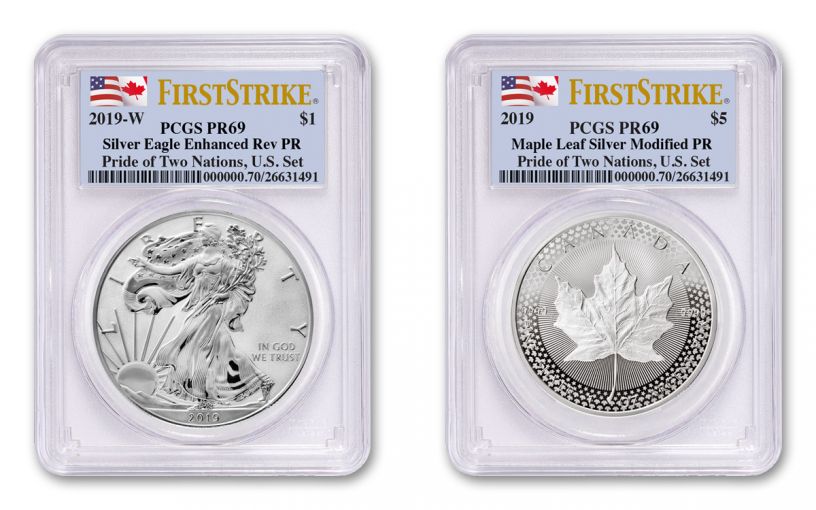 Availability: Out of Stock
This item is currently Out of Stock. Please sign up to be notified if this product becomes available.
Item #
352214
Add to Wish List Add to Wish List Wishlist is for registered customers. Please login or create an account to continue. Add to Compare
Recommended Products
Product Description

Each 2019-dated release is a legal-tender coin – the $1 American Silver Eagle was struck at the West Point Mint in a full ounce of 99.9% fine silver while the $5 Maple Leaf was struck at the Royal Canadian Mint in a full ounce of highly pure 99.99% silver. Plus, the Professional Coin Grading Service (PCGS) has certified your coins to be First Strike (FS) coins, a designation that means they were among the first struck by their respective mint and were received by PCGS or an PCGS-approved depository within the first 30 days of their release. Each coin will come sonically sealed in an acrylic holder with a white display core.

Just 110,000 of each coin has been struck with 10,000 two-piece collections set aside for the Royal Canadian Mint and the U.S. Mint releasing the remaining 100,000 two-piece sets! Now you can secure these coins in a PCGS-graded set, but you must act fast because collectors love first-ever releases with low edition limits. Reserve your set now!