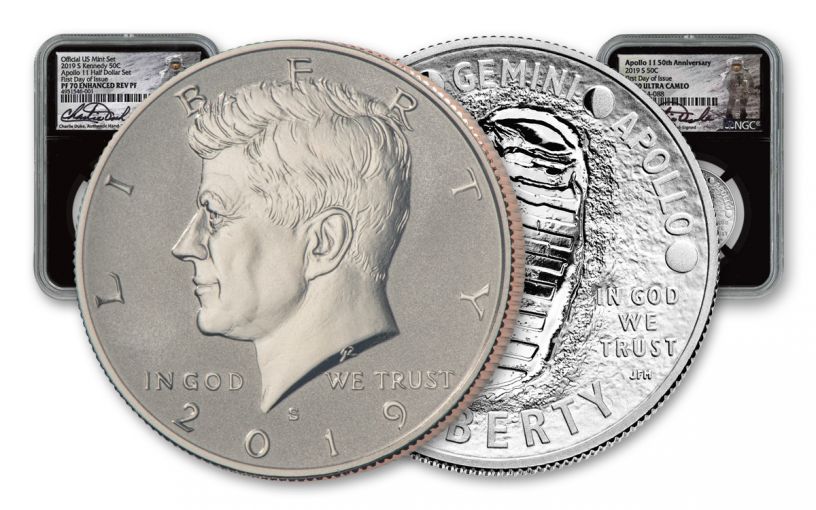 Availability: In Stock
This item will ship within 2 business days.
Item #
347476
CC Payments as low as
$149.50 / month
Add to Wish List Add to Wish List Wishlist is for registered customers. Please login or create an account to continue. Add to Compare
Recommended Products
Product Description

On May 25, 1961, President John F. Kennedy stood before Congress and stated that America “should commit itself to achieving the goal, before this decade is out, of landing a man on the Moon and returning him safely to Earth.” On July 20, 1969 – with just a few months to spare – President Kennedy’s goal was finally achieved.

The limited mintage of 100,000 sets sold out at the mint within a couple of days, but we managed to secure some of the best of the bunch. You can take home your set certified by the Numismatic Guaranty Corporation (NGC) as being flawless Proof-70 (PF70) condition, a distinction that means your perfectly-graded proofs will have ZERO imperfections – showing all features and fields exactly as the engraver and mint intended.

In addition, NGC has certified that your coins are First Day of Issue (FDI) releases, meaning they were received by NGC or an NGC-approved depository by the release date or on the business day within 24 hours of the official release date. Your coins will also come individually sealed in acrylic holders with special black display cores.

Plus, each coin comes encapsulated with an exclusive label personally signed by Charles “Charlie” Duke, a key member of the Apollo 11 mission. Duke, who not only served as CAPCOM (Capsule Communicator) for the Apollo 11 mission – meaning he was the voice of mission control for the astronauts – later became the youngest person to ever set foot on the moon during the Apollo 16 mission in 1972!

An important set for any American – a set that’s sure to send collectors to the moon and back. When they’re gone, they’re gone! Don’t miss this historic release; it’s one small purchase for you and one giant leap for your collection!

Put the first man on the moon into your collection and honor mankind’s crowning achievement with the 2019 50th Anniversary Apollo 11-Kennedy Half Dollar Two-Piece Proof Set. Order yours now!