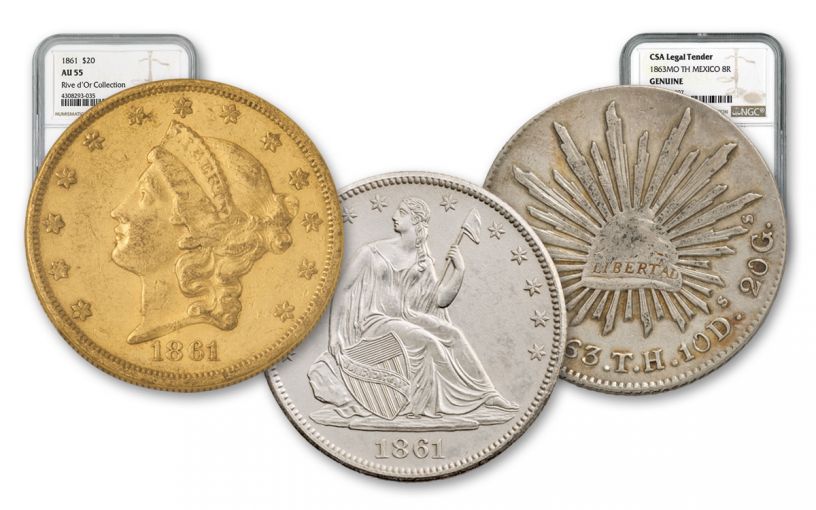 Availability: Call-In Only
This item is only available on a Call-In basis. Please call 1-800-510-6468 to speak to a representative.
Item #
351392
Add to Wish List Add to Wish List Wishlist is for registered customers. Please login or create an account to continue. Add to Compare
Recommended Products
Product Description

From 1861 to 1865, the American Civil War pitted “Brother vs. Brother” and tore apart our nation. In the first two years of the war, the South won victory after victory, and fear of a national divide gripped the public. As a result, money virtually disappeared. This 11-piece set features coins that were struck and circulated during the war, along with paper currency that entered circulation.

This collection begins with an 1861-P $20 Gold Liberty, certified by the Numismatic Guaranty Corporation (NGC) as being in Choice About Uncirculated-55 (AU55) condition. This large, high-grade circulating Gold Double Eagle may have been used to finance the war for the North.

Next is an 1861-O Silver Seated Liberty Half Dollar recovered from the wreck of the SS Republic. This is one of the coins struck under the authority of the United States – an important distinction, as the New Orleans Mint also spent time under the control of the State of Louisiana and the Confederate States of America. When the U.S. finally retook control, coins were sent north to New York before being sent back down at the war’s end to help pay for the Reconstruction. This is one of the coins that never made it back to the South, sinking with the Republic in 1865.

You’ll also receive an 1863 Mexico Silver 8 Reales, certified as Genuine by NGC. When the South seceded, they still needed currency, and so turned to Mexican Reales to fund their war effort.

In addition to these three “headliners,” this collection also includes:

Rounding out this incredible Civil War collection is an 1861 $5 Confederate Silver Currency Proof, struck in 2011 with an original plate used by the Confederacy to print money. This Currency Proof contains two full ounces of 99.9% fine silver and comes in a Paper Money Guaranty (PMG) holder.

Only three of these sets are available. Hurry and secure this Ultimate Civil War Collection now.