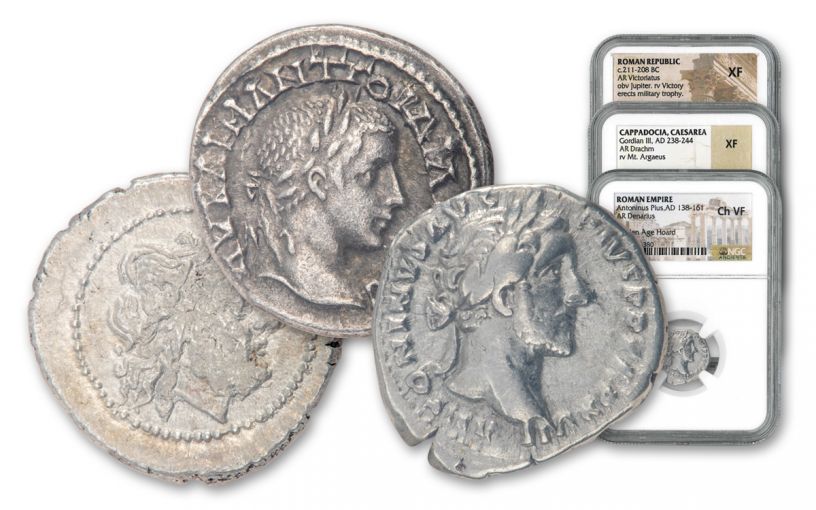 Availability: Out of Stock
This item is currently Out of Stock. Please sign up to be notified if this product becomes available.
Item #
353006
Add to Wish List Add to Wish List Wishlist is for registered customers. Please login or create an account to continue. Add to Compare
Recommended Products
Product Description

Journey Back to Ancient Rome

Hey, we get it – ancient coins are infinitely fascinating, but they can also be rather intimidating. Which coins should you start with? What sets one apart from another? It’s not necessarily as easy as comparing dates and mint marks modern American coins. That’s why we put together this unique Ancient Rome Three-Piece Legacy Set, which brings together three different ancient coins from three distinctly different Roman eras: Roman Republic, Roman Empire and Roman Provincial.

To further assist you in your journey through ancient Roman history, we called upon one of the world’s most experienced guides in author Jeff Garrett. An author and former president of the Professional Numismatic Guild, Garret is also a consultant to the Smithsonian’s National Numismatic Collection. Garrett personally inspected the coins in this set.

Each coin in this set has been professionally authenticated, graded and encapsulated by the Numismatic Guaranty Corporation (NGC) as being in Very Fine to About Uncirculated (VF-AU) condition and the entire set will come displayed in a beautiful presentation case. Plus, your set will come with a booklet published by NGC entitled Introduction to Ancient Coins. As an added bonus, you will also receive a copy of the hardcover book Ancient Coin Collecting: The Roman World personally signed by author Wayne Sayles.

If you’re looking to begin collecting ancient coins, start here. We’ve already done the work for you by seeking out these milestone coins that allow you to follow the growth of the Roman world and the origins of Western civilization. Start your numismatic journey through the ancient world of Rome today!