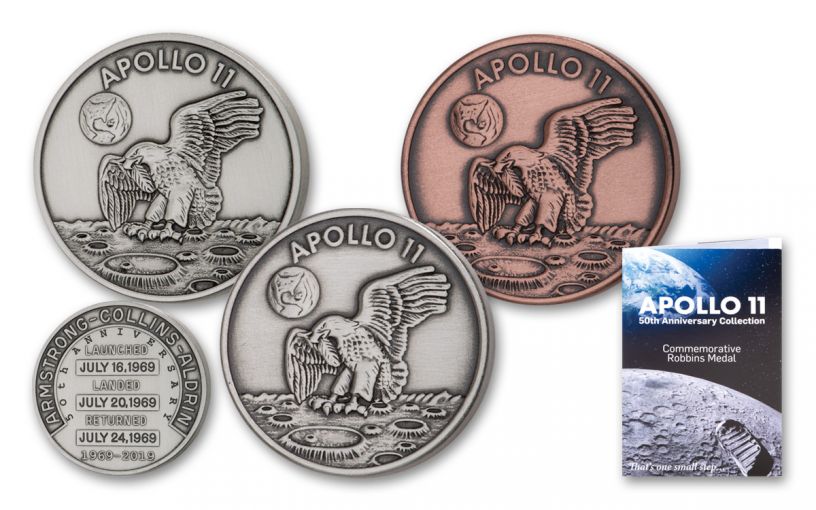 Availability: In Stock
This item will ship within 2 business days.
Item #
350664
Add to Wish List Add to Wish List Wishlist is for registered customers. Please login or create an account to continue. Add to Compare
Recommended Products
Product Description

Everyone remembers where they were and what they were doing on July 20th, 1969 when Neil Armstrong, with help from Michael Collins and Edwin “Buzz” Aldrin, became the first person in history to set foot on the lunar surface, but few can grasp all the years of preparation needed to make it possible. Fewer still know about the special payload that was blasted into space along with the astronauts on the Apollo 11 mission that made history. Besides all of the technical gear and equipment necessary to get them to the moon and back, the trio also carried with them a small cache of medals that were designed and minted exclusively for the astronauts!

The fact that the Robbins medallions were actually flown aboard the space missions, were closely associated with the astronauts, and are seldom available and only in restricted quantities make them highly sought-after collectibles on the few times they are available. But now, thanks to GovMint’s standing in the numismatic world, we have been able to partner with Neil Armstrong’s son, Mark, to use the original dies of the historic Apollo 11 Robbins Medals and made new dies to create a series of commemorative medals celebrating the 50th anniversary of the Apollo 11 mission!

These Apollo 11 Medals replicate the original medal’s design with an American Eagle landing on the moon. Created by digitally scanning original Apollo 11 Robbins Medal dies held by the Armstrong family, these 50th Anniversary Commemoratives feature the exact same design as the originals, modified only to add dual dates of 1969 and 2019 and the words “50th Anniversary.” Every other detail reflects those of the medals that traveled along with Armstrong, Aldrin and Collins as they soared through the cosmos on their way into the history books.

Now you can secure three of these fabulous Apollo 11 Robins Medal Restrikes in one collectible set! Each three-piece set includes the once-once silver, silver-plated copper and copper medals. In addition, each medal has been antiqued to give it an otherworldly appearance as if they actually had flown to the moon and back. The three medals will come sonically sealed in protective capsules with exclusive Apollo II labels and accompanied by a replica Apollo 11 mission patch.

The medals will be struck for one year and one year only – from July 20, 2018 through July 20, 2019 – the 50th anniversary of the day that Neil Armstrong became the first man on the moon. Coin collectors, history buffs, fans of space & science, and people who enjoy owning pieces of Americana will all be clamoring for these historic medals.

If there was ever a numismatic collectible that was described as being “out of this world,” it would be these Apollo 11 50th Anniversary Commemorative Medals. Secure this three-piece set now and forever own a piece of history!