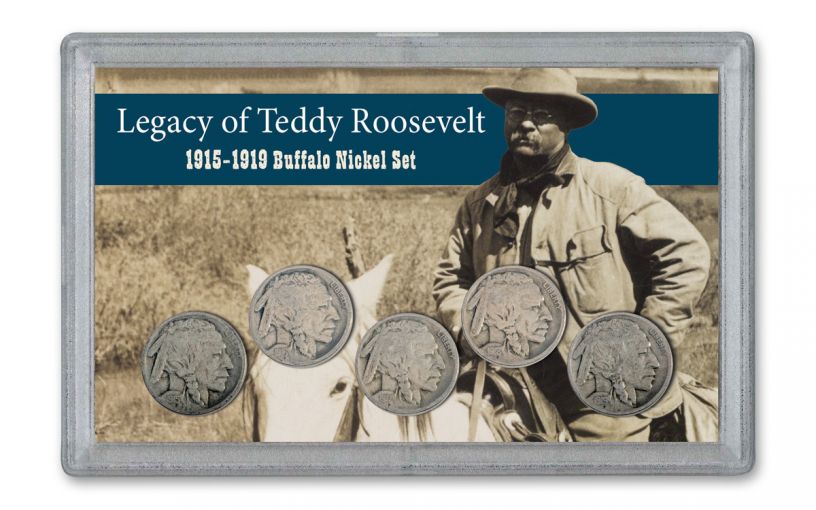 Availability: In Stock
This item will ship within 2 business days.
Item #
349303
Add to Wish List Add to Wish List Wishlist is for registered customers. Please login or create an account to continue. Add to Compare
Recommended Products
Product Description

Celebrate the Legacy of Teddy Roosevelt

Big, bold and full of the American spirit. These words describe one of America’s greatest presidents as well as one of its most famous coins. The Legacy of Teddy Roosevelt Buffalo Nickel Set brings together Buffalo Nickels from the last five years of Teddy Roosevelt’s life – coins that embody the Great Plains of America that Roosevelt loved so much. In fact, the former Rough Rider helped create National Parks across America!

Soldier, statesman, politician, conservationist, naturalist and writer – President Theodore “Teddy” Roosevelt wore all these hats during his lifetime. The man who famously “walked softly and carried a big stick,” Roosevelt was also responsible for revamping American coin designs after the Turn of the Century. These five Buffalo Nickels are a lasting testament to his larger-than-life legacy. Each set contains a 1915, 1916, 1917, 1918 and 1919 Buffalo Nickel in Very Good (VG) condition, housed together in a custom holder.

Created by famed American sculptor James Earle Fraser, the Buffalo Nickel has always been one of America’s most popular coins. The Indian depicted on the coin is a dead ringer for Oglala Lakota Chief Iron Tail – though Fraser claimed it was a composite of three men in order to protect both the Chief’s privacy and his own artistic license. The buffalo on the reverse was modeled after Black Diamond, a large American bison then on display at the Bronx Zoo in New York City not far from Fraser’s studio. This timeless design now graces the U.S Mint’s annual $50 one-ounce gold bullion coin.

Teddy Roosevelt is literally on the Mount Rushmore of Presidents and if there was a similar monument to American coins, the Buffalo Nickel would be on it. Honor both the coin and the legacy of the man by adding this 1915-1919 Buffalo Nickel Legacy of Teddy Roosevelt Five-Piece Set to your collection today!