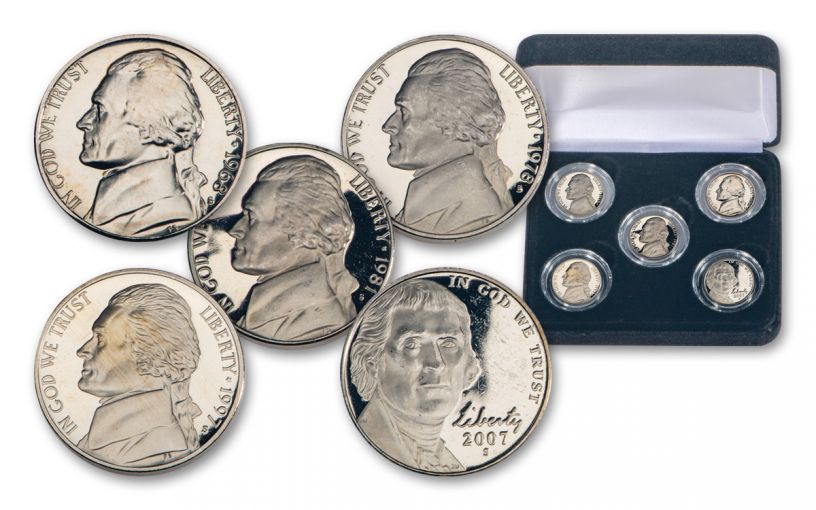 Availability: Out of Stock
This item is currently Out of Stock. Please sign up to be notified if this product becomes available.
Item #
351285
Add to Wish List Add to Wish List Wishlist is for registered customers. Please login or create an account to continue. Add to Compare
Recommended Products
Product Description

The U.S. Branch Mint in San Francisco has always been known by collectors as the source for incredibly sharp, beautiful coins. That’s why it surprised no one in 1968 when the San Francisco Mint took over the role of striking America’s Proof coins from the Philadelphia Mint. Today, fifty years on, there’s no doubt about it: The San Francisco Mint is THE mint for striking the best coins our nation has to offer. When you see a specially struck United States proof coin with its frosted designs and mirrored field, you KNOW it had to have come from San Francisco!

For most people, the portrait of President Thomas Jefferson is the only image they’ve ever seen on a nickel. And who could blame them – the image of Jefferson as designed by Felix Schlag appeared on America’s 5-cent piece from 1938 to 2004. Jefferson’s portrait underwent a change in 2005, but it is still the portrait of this Founding Father and the author of the Declaration of Independence that remains on the nickel to this day, a run of more than 80 years for the Jefferson Nickel – and still going!

Proof coins are unique because they are struck in far fewer numbers than their standard circulating counterparts. Intended for collectors, these coins are expertly crafted by the mint from hand-selected planchets, polished dies and multiple strikes to produce beautifully frosted details rising over mirror-like fields. Now you can combine the best in coin artistry with one of America’s most popular coins with this Five Decades of “S” Mint Jefferson Nickel Proofs Five-Piece Set. Add one to your cart today!