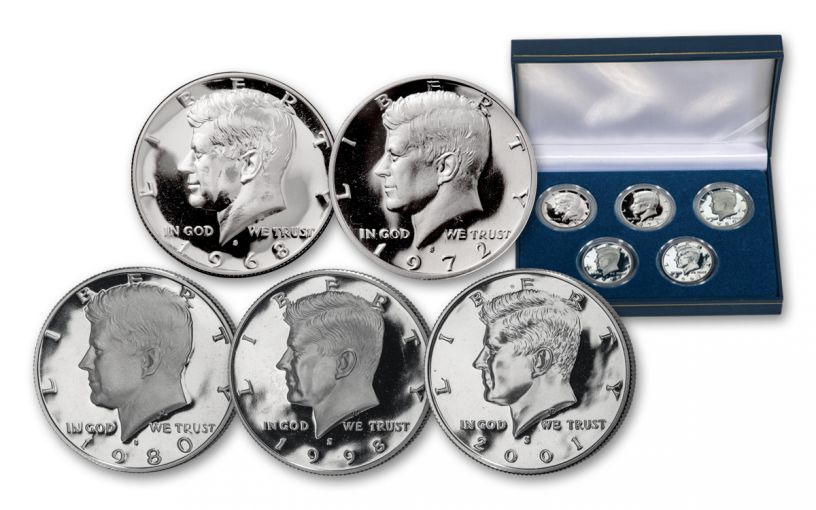 The San Francisco Mint, known for producing some of the finest strikes of any U.S. Mint, began minting Proof coins in 1968. These pieces feature frosted designs and mirrored fields for an incredible amount of luster and contrast. This set brings together five decades’ worth of Kennedy Half Dollar Proofs struck in San Francisco – one coin each from the 1960s, 1970s, 1980s, 1990s and the 2000s. That includes a 1968-S or 1969-S Half Dollar – one of the first two years the coin was struck by the San Francisco Mint, and the only decade in which the coins were 40% silver!

Designed by Gilroy Roberts, the 9th Chief Engraver at the U.S. Mint, the Kennedy Half Dollar was first issued in 1964 just a few months after President John F. Kennedy was tragically cut down by hail of assassin’s bullets. Originally intended as a one-year-only commemorative to the fallen President, the coin proved so popular that Kennedy’s profile has remained as the design on America’s big half-dollar coin ever since.

Each coin comes protected by a clear capsule, with the set displayed together in a custom case. While the popularity and the allure of JFK is still alive and well today, this set may not last for long. Reserve yours now!