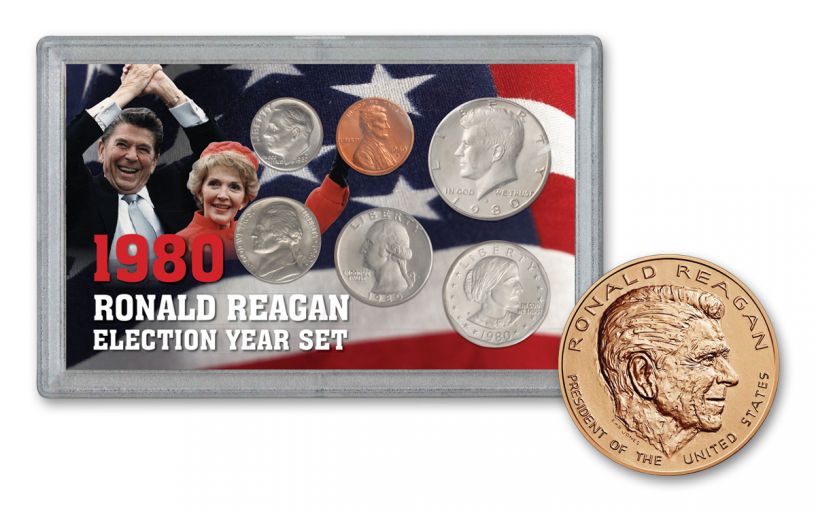 Availability: Out of Stock
This item is currently Out of Stock. Please sign up to be notified if this product becomes available.
Item #
348100
Add to Wish List Add to Wish List Wishlist is for registered customers. Please login or create an account to continue. Add to Compare
Recommended Products
Product Description

In 1980, Ronald Reagan became the 40th President of the United States of America, winning over incumbent Jimmy Carter is an electoral landslide 489-49 carrying all but four states. Known as the “Great Communicator,” Reagan enjoyed the affection of the American people. The former actor and two-term governor of California was also known as “The Gipper” from his role as George “The Gipper” Gipp in the 1940 film Knute Rockne, All American. From his “fireside chats” at the Oval office, to his blunt challenges to foreign adversaries, and even to the large jar of jelly beans he kept on his desk; Regan was able to connect with folks across America in a way seldom seen in political leaders before or since.

President Reagan may be gone, but he will never be forgotten. Now you can celebrate the legacy of this great man with the Ronald Reagan Election Year Six-Piece Set that brings together all six circulating coins struck during Reagan’s first election year of 1980 – the Lincoln Penny, Jefferson Nickel, Roosevelt Dime, Washington Quarter, Kennedy Half Dollar and Susan B. Anthony Dollar – as well as an official U.S. Mint bronze medal honoring Reagan’s presidency. Each piece comes in original Brilliant Uncirculated (BU) condition, with the circulating coins housed together in a custom card holder.