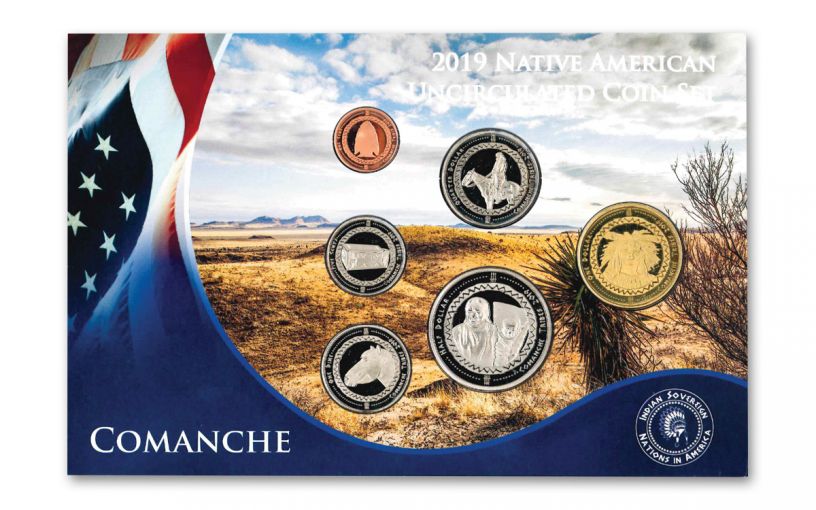 Availability: In Stock
This item will ship within 2 business days.
Item #
351272
Add to Wish List Add to Wish List Wishlist is for registered customers. Please login or create an account to continue. Add to Compare
Recommended Products
Product Description

Long before America was a nation of states, it was a nation of tribes. The coins are also recognized by the Federal Government as legal tender in each tribal nation as set forth in the Constitution of the United States and from the terms of bilateral treaties that date back to the 18th century.

With a goal of producing accurate cultural depictions of Native American tribes from across North America, the set contains a one-cent, five-cent, 10-cent, 25-cent, 50-cent and $1 coin, each featuring a common obverse of a horse’s profile – recognizing the animal that was central to the Comanche way of life. The one-year-only reverse designs include an arrowhead, a rawhide Parfleche box, a horse’s head in profile, a Comanche warrior on horseback, a mother carrying her child in a cradleboard and a Comanche tribesman in full headdress.

The Comanche nation is well-known for its horsemanship – during the Wild West days, boys became adept bareback riders by the age of 6 and adult warriors were considered to be the best horsemen who ever rode. Comanches also figured largely in one of the greatest westerns ever filmed, The Searchers directed by John Ford and starring John Wayne. The film is loosely based on the real-life story of Cynthia Ann Parker, who was kidnapped by Comanches at around the age of 9 or 10. Her uncle, James W. Parker, spent much of his life searching for her. She was finally recovered by Texas Rangers 24 years later, but not before giving birth to Quanah Parker, who would grow up to be a legendary Comanche war chief.

Each coin in your 2019 Native American Comanche Tribe Six-Piece Set comes in original Brilliant Uncirculated (BU) condition as fresh and crisp as the day it left the mint. In addition, the complete six-piece set comes displayed in is original blister pack. The colorful blister pack also serves as the set’s Certificate of Authenticity. We have only 50 sets available, so hurry and secure yours today!

The 2019 Native American Mint Comanche Tribe Six-Piece Set is a stirring one-year-only release that Wild West fans cannot pass up. Add it to your cart today!