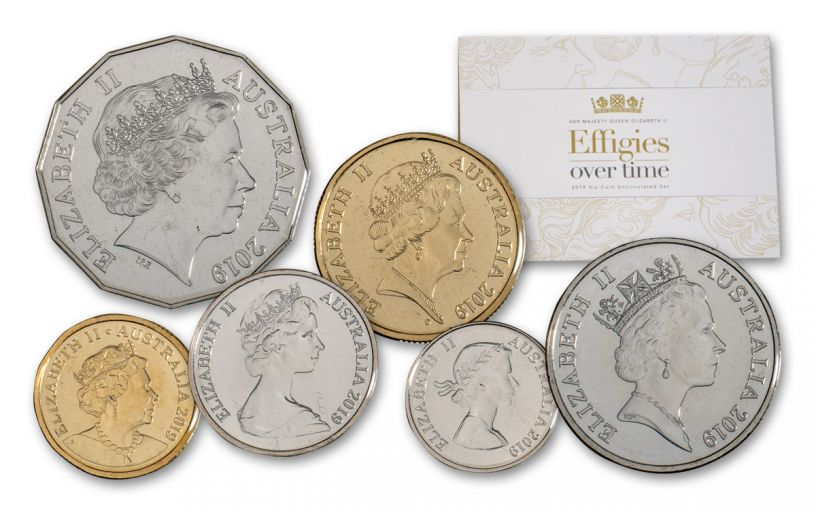 Availability: Out of Stock
This item is currently Out of Stock. Please sign up to be notified if this product becomes available.
Item #
351712
Add to Wish List Add to Wish List Wishlist is for registered customers. Please login or create an account to continue. Add to Compare
Recommended Products
Product Description

The Many Faces of Queen Elizabeth II

This fantastic set from the Royal Australian Mint brings together the various effigies that have represented Queen Elizabeth II during her reign. From the five-cent piece depicting a newly crowned Elizabeth in 1953 through the 10-cent, 20-cent, 50-cent, one dollar and finally the two-dollar piece, you can see how the Queen’s likeness has changed. It’s a fascinating set to behold, and the $2 coin presents the latest effigy of Her Majesty by celebrated Royal Mint engraver Jody Clark. Each coin is official Australian legal-tender, and each set comes beautifully displayed in an attractive card with an outer envelope. Queen Elizabeth II is the longest-reigning monarch in the nation’s history – it’s unlikely we’ll ever see a set like this again!

Witness the changing face of Queen Elizabeth II throughout her long reign with this 2019 Australia Effigies Over Time Six-Piece Set. It represents her reign that has spanned across nearly eight decades!