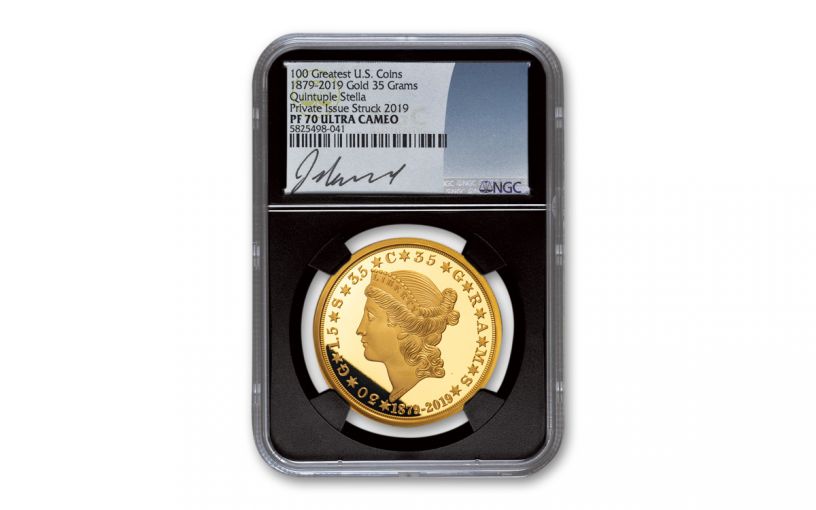 Availability: Call-In Only
This item is only available on a Call-In basis. Please call 1-800-510-6468 to speak to a representative.
Item #
354735
Add to Wish List Add to Wish List Wishlist is for registered customers. Please login or create an account to continue. Add to Compare

In the late 1870s, the United States Mint set to work developing gold coins that would circulate internationally on a par with those being used in Europe. Many people are well aware of the $4 Gold Stella created by this effort, but not as many know of its larger sibling – the ultra-scarce $20 Quintuple Gold Stella.

The U.S. abandoned the idea of an international currency and neither denomination was approved for circulation. Several pattern coins were struck, however, but while only a few hundred $4 Stellas were struck – making them a rare treasure in the annals of American numismatics – just FIVE $20 Quintuple Gold Stellas are known to exist. One of these rare treasures sold at auction in 2016 for nearly $1.9 million and another permanently resides in the National Numismatic Collection of the Smithsonian® in Washington, D.C.

Even if you could afford one of these original $20 Quintuple Gold Stellas, the chances of you ever having the opportunity to acquire it are slim and none. But now you CAN secure a pure gold tribute to this historic release thanks to this series of gold proofs officially authorized by the Smithsonian. Dual dated 1879-2019 in honor of the coin’s 140th anniversary, these proofs were struck in 1.234 ounces of 99.99% pure gold.

Each Smithsonian 1879-2019 $20 Quintuple Gold Stella Proof available in this offer has been graded by the Numismatic Guaranty Corporation (NGC) as being in flawless Proof-70 Ultra Cameo (PF70UC) condition, a distinction that means your perfectly-graded proof will have ZERO imperfections – showing all features and fields exactly as the engraver and mint intended. Just 300 of these historic proofs have been struck. Each will come houses in a presentation case with a Smithsonian logo and accompanied by a storybook that details the history of the famous Stella pattern coins

The famous $20 Quintuple Stella returns as a gold proof officially authorized by the Smithsonian. With such a small limited edition, these will not last long. Don’t miss out – Order yours today!