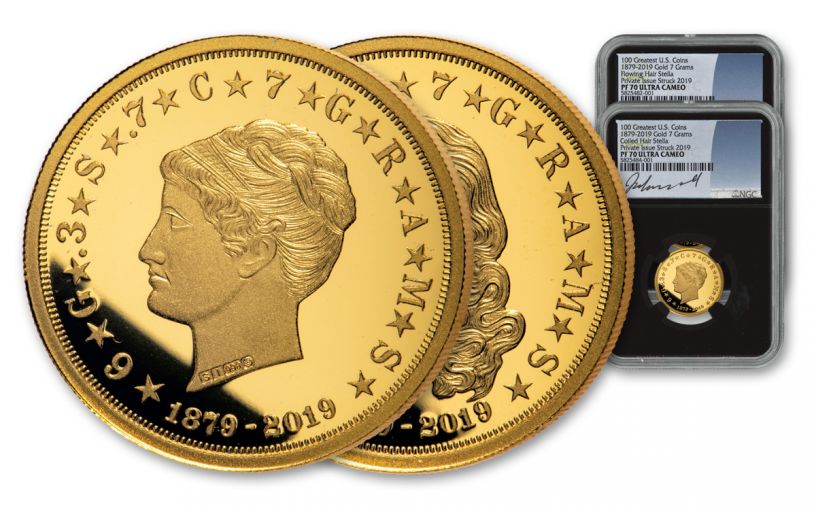 Availability: Out of Stock
This item is currently Out of Stock. Please sign up to be notified if this product becomes available.
Item #
358628
Add to Wish List Add to Wish List Wishlist is for registered customers. Please login or create an account to continue. Add to Compare

During America’s Gilded Age, Congress was feeling fat and sassy. The nation finally seemed to be recovering from the effects of a depression spawned by the Panic of 1873 and the time seemed ripe to try out a new coin that would help spur the economy. This new coin would be a $4 gold piece, but before they introduced it to the American public, members of Congress wanted to see what this new denomination would look like. That’s when the U.S. Mint’s two reigning superstars stepped up.

Assistant Mint Engravers Charles Barber and George Morgan worked closely together for more than 40 years despite a rivalry that began when Morgan joined the Mint in 1876. Morgan was seen by Barber as a threat to his own dreams of following in the footsteps of his father, William Barber, as the Mint’s Chief Engraver. And when Morgan’s design was selected for the 1878 dollar that went on to become the Morgan Silver Dollar, America’s most popular and collected coin of all time, one could have probably started chipping icicles from Barber’s shoulders.

Both engravers set down to creating their own design for the $4 Stella. Barber’s design of Lady Liberty with flowing hair stood in stark contrast to Morgan’s version of Liberty with coiled hair. While special test pattern coins were struck of each version in 1879, Congress ultimately decided not to pursue the coin. Though scrapped, the coin did not disappear into the annals of history. Today, those pattern coins are considered two of America’s greatest numismatic treasures. Unfortunately for the vast majority of collectors, it’s almost impossible to secure one of these coins. Only 460 patterns coins were ever struck in 1879 and 1880 combined, and originals have sold for as much as $2.5 million at auction in the rare instance when they become available.

But now the famous Stella returns on a spectacular series of gold proofs officially authorized by the Smithsonian®. Dual dated 1879-2019 in honor of the coin’s 140th anniversary, these proofs give today’s collectors a chance to own the legendary designs as they were meant to be seen. This set includes a pair of seven gram proofs struck in 99.9% pure gold -- one of each iconic design: Barber’s Flowing Hair and Morgan’s Coiled Hair. These designs are so important in American history that they are listed by author and expert numismatist Jeff Garrett in his book 100 Greatest U.S. Coins.

What’s more, the Numismatic Guaranty Corporation (NGC) has graded each proof to be in flawless Proof-70 Ultra Cameo (PF70UC) condition, a distinction that means your perfectly-graded proofs will have ZERO imperfections — showing all features and fields exactly as the engraver and mint intended. Each set is also accompanied by an informative storycard that details the history of both designs.

Best of all, your proofs will even come sealed in acrylic holders and encapsulated with labels personally hand-signed by one of America’s top numismatic experts and an advisor to the Smithsonian’s National Numismatic Collection: Jeff Garrett, who included the two original Stella pattern coins in his excellent book, 100 Greatest U.S. Coins!

Only a limited number of these world-exclusive 1879-2019 Gold Stella Two-Piece Proof Sets are available — and even fewer signed by Jeff Garrett! Don’t miss out; order your set today!

STRUCK IN HIGHLY PURE GOLD – Each proof in this set has been struck in seven grams of 99.9% pure gold.

GRADED IN PERFECT PROOF CONDITION – Each proof in your 1879-2019 $4 Gold Stella Two-Piece Proof Set has been graded by the Numismatic Guaranty Corporation (NGC) as being in perfect Proof-70 Ultra Cameo (PF70UC) condition.

SIGNED BY LEADING NUMISMATIC EXPERT – Your proofs will come sealed with labels signed by Jeff Garrett, one of America’s top numismatic experts and an advisor to the Smithsonian’s National Numismatic Collection.

EXCLUSIVE RELEASE – These proofs are available in limited quantities and are offered exclusively through GovMint.com.