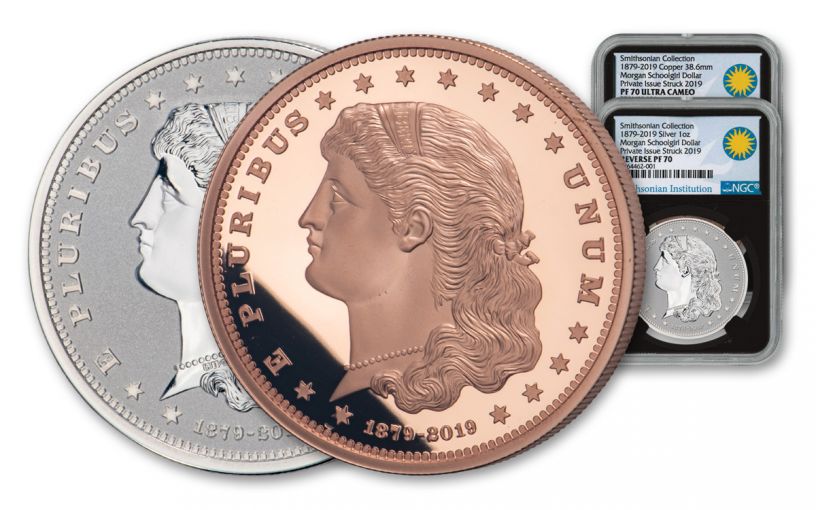 Availability: Call-In Only
This item is only available on a Call-In basis. Please call 1-800-510-6468 to speak to a representative.
Item #
352460
Add to Wish List Add to Wish List Wishlist is for registered customers. Please login or create an account to continue. Add to Compare

Today, most collectors know George T. Morgan for his legendary Morgan Silver Dollar and his designs for commemoratives and medals. But many of his designs were struck as pattern coins and never released for circulation – including his 1879 Schoolgirl Dollar, which is today among the most celebrated and sought-after American coinage patterns. 2019 marks the 140th anniversary of this design.

Featuring a portrait of a young girl wearing a single strand of pearls, a youthful Lady Liberty is shown facing left, her hair tied with a ribbon. The word LIBERTY is inscribed in her hair band. The “Schoolgirl” name was coined by Harlan P. Smith and David Proskey, owners of the New York Coin and Stamp Company, for an 1891 auction catalogue offering a collection that included one of these coins.

This set includes two proofs: a one-ounce 99.9% silver reverse proof and a dollar-sized copper proof. Each bears the iconic Morgan Schoolgirl Dollar design. The entire set comes match-graded by the Numismatic Guaranty Corporation (NGC) as being in perfect Proof-70 Ultra Cameo (PF70UC) condition, a distinction that means your perfectly-graded proofs will have ZERO imperfections – showing all features and fields exactly as the engraver and mint intended. In addition, each proof will be sonically sealed in a protective holder with an exclusive Smithsonian® label, and the entire the set will come housed in a Smithsonian-branded presentation case.

Only a limited number of these magnificent proofs have been certified by NGC as being in flawless Proof-70 Ultra Cameo condition! What’s more, the original copper and silver patterns have sold for as much as $74,750 and $312,000, respectively! Don’t miss this opportunity to secure one of history’s most sought-after designs. Click this set to your cart today!

George T. Morgan’s famous “Schoolgirl” Dollar is among the most sought-after American coinage patterns. Now you can add this brilliant design to your collection thanks to this officially authorized Smithsonian® silver & copper two-piece proof set. Don’t delay; order yours before they’re gone!