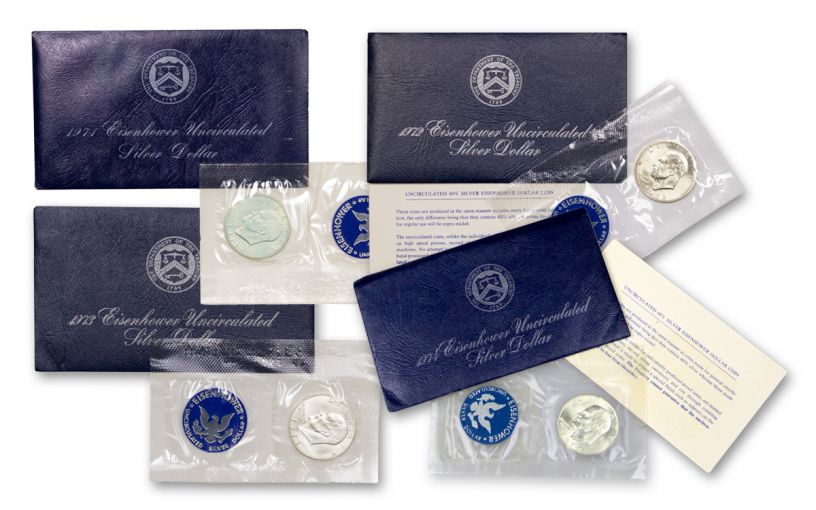 Availability: Out of Stock
This item is currently Out of Stock. Please sign up to be notified if this product becomes available.
Item #
340298
Add to Wish List Add to Wish List Wishlist is for registered customers. Please login or create an account to continue. Add to Compare

If This Silver Set Doesn’t Make You “Like Ike,” Nothing Will!

Many of us have fond memories of from our childhood of a visiting relative who miraculously produced a silver dollar from behind our ears. More often than not, this was an Eisenhower Dollar. Back then, those big dollar coins had some serious purchasing power for kids – comic books were 15 cents in 1971, candy bars and baseball card packs each cost 10 cents, and you could probably get a bottle of soda pop for less than 25 cents. With shiny “Ike” Dollars in our pockets, we felt like we were rich!

Struck only from 1971-1978, it’s been 40 years since the last Ike Dollars rolled off the presses at the U.S. Mint. The last of the large-sized dollar coins, many Ike Dollars can command high prices – especially the Uncirculated collector versions struck in 40% silver. Finding one of these beauties todays is tough enough let alone securing a complete set of Silver Ikes. But thanks to our status and contacts within the coin world, we’ve managed to assemble a small hoard of Uncirculated Ike Silver Dollars – and we’re making them available at a fraction of what they are being offered for elsewhere!

The vivid memories of these big coins is one of the reasons many people started collecting coins in the first place. On the obverse is the bust of Dwight David Eisenhower – the nation’s 34th President and a 5-star general in the United States Army who served as the Supreme Allied Commander of Allied forced in Europe during World War II. The coin’s reverse is the same design as that from the insignia of the Apollo 11 mission that landed the first men on the moon. These two designs together pay tribute to one of America’s greatest presidents and one of the country’s greatest achievements all on one coin!

When Eisenhower was considering a run for the Presidency in 1951, people who wanted him to run coined the phrase “I Like Ike” as a symbol of their hopes. The slogan stuck and helped propel Eisenhower to The White House. Now you, too, can like Ike with this incredible complete set of Silver Ike Dollars. In addition each coin will come in its original government packaging. As an added bonus, you will also receive a Bicentennial Silver Kennedy Half-Dollar and a Bicentennial Silver Washington Quarter that were sealed in packaging along with the dual-dated 1776-1976 Bicentennial Silver Ike Dollar – they’re yours at no extra charge! The 1971-1974 Ikes each come in their own Mint-issued “Blue Pack” – so-called for the coin and a plastic token sealed in cellophane and packaged in a blue envelope. The 1776-1976 Ike Dollar and bonus coins come in a Mint-issued red envelope.

With the popularity of Eisenhower, the fast-approaching 50th anniversary of the Apollo 11 moon landing, and the limited number of sets available, there’s no guarantee how long our supply will last. Order yours now!