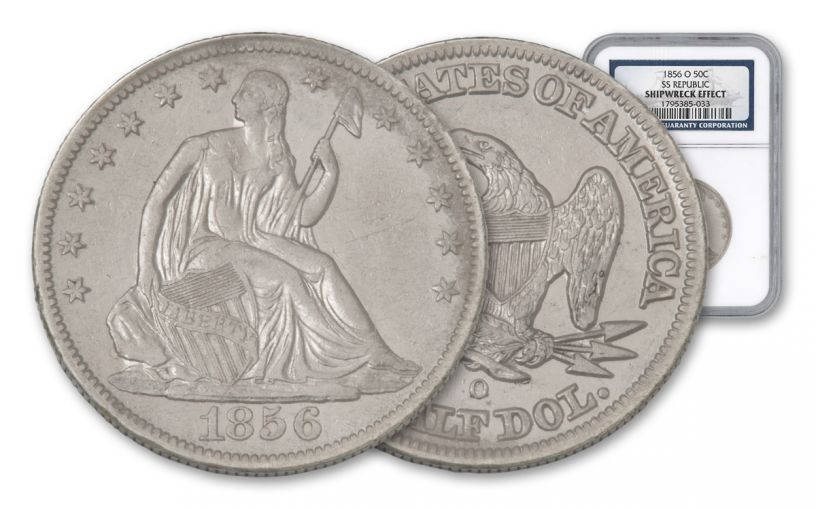 Availability: Out of Stock
This item is currently Out of Stock. Please sign up to be notified if this product becomes available.
Item #
351912
Add to Wish List Add to Wish List Wishlist is for registered customers. Please login or create an account to continue. Add to Compare
Recommended Products
Product Description

During the Civil War, control of the New Orleans Mint was seized multiple times – first by the Republic of Louisiana, then the Confederate States of America, and finally the United States of America. When the U.S. finally retook control, a huge volume of coins struck before and during these tumultuous years was shipped to New York City. In 1865 after the war mercifully came to an end, a large hoard of those same gold and silver coins valued at $400,000 was loaded aboard the SS Republic, a former merchant ship and converted Confederate blockade runner, and sent back to New Orleans to help rebuild the South.

But the coins never arrived.

The SS Republic’s last voyage began on October 18, 1865. On October 23, the sidewheel steamship found itself helplessly stalled off the coast of Georgia and sank just as the passengers and crew escaped into lifeboats and a makeshift raft. Fast forward to the year 2003 when, after 12 years of search by the Tampa, Florida-based commercial archeological company Odyssey Marine Exploration, the SS Republic had been found 100 miles off the Georgia coast approximately 1,700 feet below the surface of the Atlantic! Recovery efforts soon commenced on the sunken remains culminating in the recovery of thousands of gold and silver coins estimated at being worth today as much as $180 million!

Now you can add recovered treasure from the wreck to your collection! Here’s your chance to secure a spectacular 1856-O Seated Liberty Half Dollar struck at the New Orleans Mint and certified by the Numismatic Guaranty Corporation (NGC) as being an official “Shipwreck Effect” coin from the wreck of the SS Republic. This is the first time this date has been made available individually from the shipwreck!

Your coin will also come with a load of extras, including a DVD detailing the ship’s history and recovery, the beautifully illustrated 276-page book, Lost Gold of the Republic, which tells the story of the your newly claimed sunken treasure, and a custom-design story booklet that recounts the epic tale of the SS Republic’s loss and recovery.

When was the last time you added a real piece of American sunken treasure to your collection – one that spent nearly 140 years underwater? Don’t miss out; put this spectacular coin in your cart today and secure your very own Civil War-era sunken treasure!