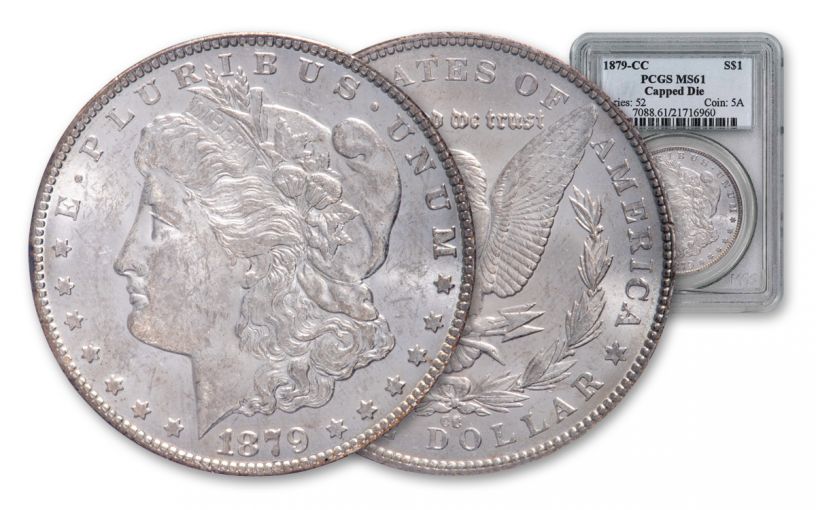 Availability: Out of Stock
This item is currently Out of Stock. Please sign up to be notified if this product becomes available.
Item #
251849
Add to Wish List Add to Wish List Wishlist is for registered customers. Please login or create an account to continue. Add to Compare
Recommended Products
Product Description

When coins are being struck in rapid succession, errors are bound to happen as the combination of strain and pressure combine to work their magic on dies. One such error is known as a die cap error. A Capped Die happens when a coin sticks to the hammer die and, if it remains on the die long enough, will spread around the outside of the die. The struck coin is a “brockage” strike. The coin that adhered to the upper die is known as a die cap. This process repeats itself as more coins are struck by the cap. The greater the number of strikes, the higher the cap metal will be pushed around the upper die shaft forming what looks like a bottle cap. Eventually, the cap brakes away from the die.

Here we have a one of the most exciting die cap varieties we have ever come across. Not only is it a Capped Die variety 1879 Morgan Silver Dollar struck at the Carson City Mint, but it has been certified and graded by the Professional Coin Grading service (PCGS) as being in beautiful Uncirculated Mint State-61 (MS61) condition. This 1879-dated Morgan with the iconic “CC: mintmark makes it a hotly desired key-date coin in its own right, but the addition of it being Capped Die variety further guarantees that it will be intensely coveted by collectors.

According to respected numismatist Ron Guth, The “Capped Die” 1879-CC Dollar is very scarce. The Executive Director of the Numismatic Literary Guild, a nonprofit organization that reports on all forms of money, medals and tokens as collectibles, Guth said, that the coin earned its name from the crusty die rust that shows up as raised dimples around most of both letters of the mintmark. “The Capped Die is also an overmintmark variety, though the rust obscures most of the details,” Guth said. “Many collectors choose to obtain examples of both the normal or “clear” mintmark and the Capped Die mintmark, so considerable demand exists for a date that is already scarce to begin with.”

Coming from a mintage of only 756,000 coins — and with only 9,725 graded by either the Numismatic Guaranty Corporation (NGC) or PCGS — this key-date coin is a must-have for your Morgan collection. We only have one available, so hurry and order now.

CAPPED DIE MORGAN – This coin earned its name from the crusty die rust that shows up as raised dimples around most of both letters of the mintmark. The Capped Die is also an overmintmark variety, though the rust obscures most of the details.

AMERICA’S MOST POPULAR AND COLLECTED COIN – Designed by U.S. Mint Engraver George T. Morgan, the Morgan Silver Dollar was struck from 1878 to 1904 and again in 1921. Today it is one of the most popular and heavily collected of all United States coins.

KEY DATE MORGAN SILVER DOLLAR– Your 1879-CC Morgan Silver Dollar was struck at the Carson City Mint. Morgans bearing the “CC” mint mark are valued by collectors because the Carson City Mint is the mint responsible for the smallest number of Morgans struck.

THE CASE OF THE DISAPPEARING MORGAN – Despite millions of Morgan Silver Dollars being struck from 1878-1921, most were lost in circulation or melted down in mass silver meltings. In fact, coin experts believe that only 15% of all Morgans ever struck remain in existence today.